Q: What's High in the Middle and Round on Both Ends?

A: The giant buckeye-shaped bruise that will be swelling on the butt-cheeks of Ohio State's football team courtesy of LSU after Monday night's BCS championship game at the Superdome. 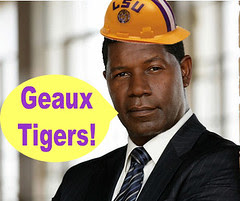 I'm very excited about Monday night's football game. Even Allstate's sponsorship won't ruin it for me. I've devised a drinking game where every time we see Allstate's spokesman Dennis Haysbert lie about the "good hands", we'll chug shots of a drink I've invented called "Dennis Hasybert will do anything for money" or "Allstate's $ whore" for short. I haven't figured out the recipe yet, just the name. I wonder how much money Dennis Haysbert has made off of Allstate screwing their customers? At least he's happy, as are the share holders. The people of Louisiana and Mississippi who had Allstate insurance when Katrina hit, well, we're not so happy. Even though I would rather Allstate had paid us in October of 2005, at least their money won't be going to fund suicide bombers. Instead that money will be used to advertise Monday. Allstate, Superdome, good hands, "that's Allstate's stand," etc. Damnit, I need to figure out the recipe for Allstate's $ whore soon, as writing this blog made me realize that I need a drink!. Gilgamesh and I today went to the Black and Gold shop and bought LSU shirts and hats, and we're going to watch the game at Howie's. That's where we saw LSU beat Oklahoma for the championship in 2003, so it has good karma. As Mr. Haysbert says in the picture above, Geaux Tigers!
Posted by Michael Homan at 7:51 PM

I can't help but see Dennis Haysbert now as some sort of bad omen. Too many awful accidents have happened in those Allstate commercials, and he just happens to be RIGHT THERE. Dennis, man, get into the business of knocking on the doors of lottery winners and presenting them with their checks!

Leigh, that's the funniest thing I've heard in some time, but I think you're on to something. Do the police know about this guy Dennis? He's probably cutting brakes and taking down stop signs.

I just can't help but think that Dennis' career is gonna be hurt by the damn commercials. Then again, we seems to have come a ways from the days in which the actor who played Norman Bates couldn't get a job to save his career after "Psycho"....