Hey Senator David Vitter, watched you in the debate tonight, and I'm left with 2 questions:
First, I keep hearing you talk about the U.S. government giving out more than 1 billion dollars to dead farmers. My father is a dead farmer. Could you give me more information so my siblings and I can tap in to this program? It sounds fantastic.
Second, you claim that your wife and your God have forgiven you. I know my marriage wouldn't survive if I had a history of committing adultery with prostitutes so I won't even ask you about that. But about your God, my God is less forgiving. How did you get your God to forgive you? Did you kill an Amalakite or an evil goat or something? Do tell.
Posted by Michael Homan at 7:54 PM 1 comment:

As a teacher and a parent I was intrigued by the message and animation in this video making its rounds on the net:
Posted by Michael Homan at 8:43 PM 1 comment:

As much as I hate to admit it, Texas owned Nebraska during the Big 12 Tenure. It wasn't even close to a rivalry, as it was dominance. I still hate Texas, now more than ever.
Posted by Michael Homan at 5:46 PM 2 comments:

I can't stand Texas. I've been there many times, to awful places like Dallas, Houston, and San Antonio. My hatred of Texas might stem from an early encounter. The first time I entered Texas was to transfer buses at the Dallas Greyhound station. It was after an awful trip to Arizona, and Therese and I had to spend about 8 hours in this hell. This bus station was full of men wearing boots, giant cowboy hats, belts with giant buckles with snake rattles, and tight boot-cut jeans with chewing tobacco circles marking the back pockets. I don't remember seeing any women. Later in life I've spent many hours at the Houston and Dallas airports, and it's the same story. A few suits, but still the tobacco tins. Everyone in Texas owns a truck with a gun rack. They live in dry counties within driving distance to a neighboring "sinful" county full of liquor stores and strip clubs selling pornography. Then there is the whole Alamo myth, about the freedom fighters/tea baggers Davy Crockett and Sam Houston. I wish I could go back in time and fight with Santa Anna.
But perhaps the main reason I hate Texas stems from recent football events. Sure, there were jerky Cowboy fans last year at the Dome when the Saints had their first loss. But hey, Saints won the Superbowl, so I'm over that. But I grew up with Nebraska being dominant in Big 8 football. Nebraska was part of the Big 8 for 100 years. Then in 1996 the Big 8 bailed out the SW conference and formed the Big 12. This conference has greatly benefited Oklahoma and Texas, but has not been very good to Nebraska. In fact, the Huskers have lost 8 games and won only 1 since the formation of the Big 12, and many of the games have been very close. A few times it has been Texas who in the Big 12 championship game knocked Nebraska off so we couldn't play for the National Championship. Last year's Big 12 Championship, in which Nebraska stopped the Texas offense only to have the officials put one second on the clock enabling them to kick a field goal, well, that symbolized the whole Big 12 series. The Big 12, great for Texas, awful for Nebraska. According to the scoreboard, Nebraska has been owned by Texas. But the reality is much more complicated, as Nebraska has dominated most of the games statistically. At last, Nebraska plays Texas tomorrow. In Memorial Stadium.
Thankfully and sadly, this is Nebraska's last year in the Big 12. How great would it be to hand Texas their third loss in a row, and then play Nebraska's biggest rival, Oklahoma, in the Big 8 I mean 12 Championship game. Go Big Red!
Posted by Michael Homan at 8:51 PM 1 comment:

We bought this house at 224-226 South Hennessey a few years ago for $207,000. We lived in the downstairs unit for a couple of years while our house, 1 block away, was being rebuilt. When we finally moved back home we rented out both units. 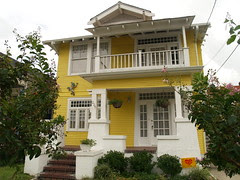 Being a landlord is at times a hassle. One of our tenants became very late in payments and eventually left owing us quite a bit of money. Over the summer we tried to sell it. We first listed it at $225,000, and lately reduced it to $210,000. We came very close to selling it once but the buyer's financing fell through. It's been on the market for 3 months, and I think we're going to have to get back into the landlord business. Thus I listed the apartments on Craigslist today. The rent is $1000 per unit, and I've already gotten several people who want to check it out. I sure wish we could have sold it though, and at times I'm afraid we owe more on this house than it is currently worth.
Posted by Michael Homan at 3:03 PM 2 comments:

We elevated our home in October of 2007. You can actually see it go up up up in this video:
My government, as part of a Hazard Mitigation Grant Program (HMGP), claimed they would reimburse us for the costs. It cost a lot, about $90K. But the thinking is that it wouldn't flood again and thus would potentially save the tax payers hard-earned money in the long run.
That was three years ago. We got reimbursed about half of the costs in May of 2009. We're still waiting for the rest.
Posted by Michael Homan at 5:19 PM 2 comments:

My sister Chris, or Poncho as we call her, was in town over the weekend. Like a good brother, last Christmas I paid for us both to get tattoos. She got a Cubs logo on her ankle, I got a Saints fleur-de-lis on my calf. We ambitiously sought out to see our two favorite professional teams play over the course of two days. So we all drove to Houston to see the Cubs play the Astros. Our first stop in Houston was the Beer Can House. It was truly awesome. And that's not the beer talking. Here are a few photos of my newest favorite place on earth: 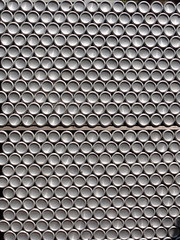 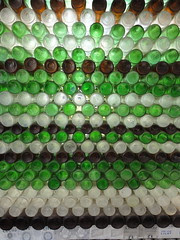 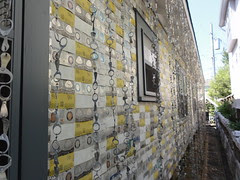 Then we went to see an art display called St. Boniface's Last Days at the Art Palace Gallery featuring the work of Peat Duggins, who is Therese's cousin. Then some more museums and then we saw the Cubs beat the Astros. It was Gilgamesh's first major league baseball game. Here is Chris, a true Cubs fan, at Minute Maid Field: 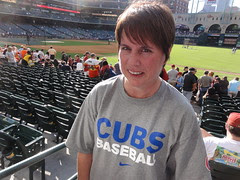 It finished at 9ish, and then I drove 5 1/2 hours back to New Orleans, slept, and with Poncho, headed to the Dome.
There we engaged in the pregame ritual of reading from the Book of Breesus and the Who Dat Prayer Book under the leadership of Chef Who Dat? Video of this sacred event from an iphone courtesy of Mark C. is here:
Then the Saints barely beat the Panthers and then we slept well, knowing both of our teams won.
Posted by Michael Homan at 8:17 PM No comments:

When the Anti-Government Fringe Runs Government

When I lived in Israel I was amazed to learn that their parliament (the Knesset) included religious Jews who always voted against legislation that would favor Israel. This was because these elected officials believed that the nation of Israel had no right to exist until the Messiah returned, and thus they were bent on destroying it. This of course seemed to me to be a bad way to run a country.
More recently I'm troubled by the anti-government Tea Baggers. They are angry, and they keep saying they want their country back from an imaginary big government socialist plutocracy. Sure, there are many Republicans who for years performed poorly on purpose to argue that government is never the answer. This is best exemplified for us in the Gulf Coast with FEMA, the apex of government incompetence. Clearly the Tea Baggers don't want to destroy the United States, and with unemployment being so high and foreign policy so unethical I'm angry as well. But I'm a big fan of roads, the post office, and public education, and these things need taxes. I also would only vote for a candidate who has a clear plan of how to better govern, not one bent on doing away with government. That would be anarchy, which sounds appealing at first to my punk rock roots, but I tasted anarchy in the days after the levees failed, and it sucked.
Posted by Michael Homan at 10:49 AM 1 comment: