Mid-City New Orleans is pretty quiet about now, with curfew officially beginning in about 3 hours. Early this morning Therese, Kalypso, Gilgamesh, and our dog Kochise got in the Highlander and drove to a friend's house in Baton Rouge. I decided to stay here. I can't find a very good reason to explain why I needed to stay, except that I'm awfully stubborn and I was so profoundly impacted by the events that took place 3 years ago that I'm now addicted to that chaos. I imagine it must be like being addicted to heroine. You know it isn't good for you and it is hard on your loved ones, but you keep making that destructive decision. In any event, this storm does not seem to be anywhere near as powerful as Katrina, and it keeps veering west, despite Mayor Nagin's apocalyptic predictions. So me and Mosey are here on S. Alexander Street, along with my neighbors Mike and Steve, and we're hoping for the best. With our generator, stockpiles of water and canned goods, even in the worst case scenario I'm set for several weeks. But I think come this time tomorrow, as the storm winds finally begin settling down, I think New Orleans is going to be just fine.

I find myself listening to the song "Like a Hurricane" by Neil Young.

Living in New Orleans, I think about Hurricane Katrina every hour of every day. I feel like I have not yet entered the "post" in "post traumatic stress disorder." One-third of the houses in this great city remain empty, and the black flood line is still visible throughout my neighborhood. Today near my house they are finally burying the remains of 85 unidentified individuals who died after the levees broke. How sad it would be to drown and not have anyone be able to identify the body. For me that epitomizes being alone, and serves as a microcosm for the U.S. government's abandonment of our recovery. At the same time I'm inspired by all of the students, church groups, and volunteers who have travelled and given their sweat to help us rebuild. I've also very much enjoyed living in our renovated house, though I'm still angry as hell it took three years to rebuild due to the insurance industry. And it's not easy to be objective with Gustav entering the Gulf. Many people here are terrified the city will be underwater come Tuesday. Our lives here depend on quality levees, and nobody I know has any faith in the Army Corps of Engineers. But even with all of this stress, I wouldn't want to live anywhere else. New Orleans is unique. When the city honored the 85 unidentified victims of the failed levees, they sent them out with a Jazz Funeral, and Lord how I want to be in that number.
Posted by Michael Homan at 8:21 AM 4 comments:

Xavier has announced that classes will be cancelled after 12 noon on Friday, and they won't resume until Thursday. Today we made sure the car was full of gas, we had our insurance policies in hand, and we stocked up on canned food and bottled water. Tomorrow, we make sure the generator is working, and we start thinking about an evacuation plan. Yikes!
Update Thursday 6AM: All of the panic seems premature, but there is panic. The two gas stations nearest Xavier don't have any gas and have shut down completely. There is, at the moment, only a 20% chance that New Orleans will see winds of 45 mph or more.
Posted by Michael Homan at 9:46 PM 3 comments:

Yesterday, on the first day of class for Intro to Biblical Studies, I taught like Jesus. But before elaborating on my Christ-like pedagogy, some background information is necessary:

In this class we always start with the topic of 586 BCE, the destruction of Jerusalem and the Temple, and exile and fighting assimilation in Babylon. We listen to both Don McLean and Bony M sing "By the Rivers of Babylon" and we read Lamentations. In Lamentations 4:6 the text reads "The punishment of my people is greater than that of Sodom, which was overthrown in a moment without a hand turned to help her." That notion of sudden death preferable to a long drawn out agonizing one got me thinking about my father's favorite short story, "Lost Face" by Jack London, and then that got me thinking about mice.

I've had some pretty epic battles against rodents in my office before. First they chewed off the face of my Moses action figurine, and then they attacked a nice Bedouin family. But recently when we were moving furniture to our restored home, we noticed that mice had recently infiltrated our old laundry room. And thus, the following parable was born, linking me forever with Jesus:

There was a fat man from Nebraska who noticed mice poop on his laundry room floor. He bought two types of traps. The standard spring loaded bar mouse trap, and these new fangled sticky pads. The next day, there was one dead mouse, nearly decapitated, in the spring loaded trap, and there were two mice, still alive, suffering on the sticky pads, who were thrown into the trash can where they died a slow tortuous death and their corpses smelled like spoiled crawfish. The fat man with the bad karma was reborn as a three legged mouse, and one day he tried to help his mouse friend on a sticky pad and he got caught too. Now I ask you, which of these mice had the better fate?
Posted by Michael Homan at 7:50 AM 2 comments:

How to Ruin Labor Day Weekend

Q: Wouldn't it be funny if, after three hard years working to get back into our home in Mid-City New Orleans, a hurricane named after a field-goal-kicking mule came along, and wiped us out again?
A: No, that would not be funny. 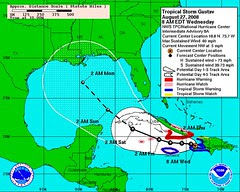 Posted by Michael Homan at 7:45 AM No comments:

The Last Move of My Life

In just one hour, I will walk from my office to a gas station which rents moving trucks. I'll fill out some forms, and then drive off to start loading our material possessions, things that have been sitting so long in storage. We hope to load the truck tonight and then park it in front of our house, and then when we wake up tomorrow, we'll start unloading. Then I'll drive the short distance over to the house where we live now, and start loading that stuff, and then we'll unload it. I'll be tired and sweaty, but I'm very much looking forward to this, because I don't anticipate ever having to move again. I plan on living in this house until the day that I die, which according to Deathclock is in 14 short years. So I'll help carry the stuff we own inside, but someone else will have to bring these things and my corpse out one day. I'll try to lose some weight so it's not too much of a burden.
Posted by Michael Homan at 2:21 PM 6 comments: 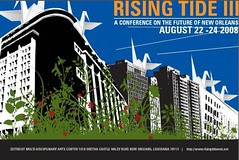 Rising Tide III will take place this weekend. It's an event where New Orleans bloggers and others "come together to dispel myths, promote facts, share personal testimonies, highlight progress and regress, discuss recovery ideas, and promote sound policies at all levels." John Barry will be the keynote speaker. I won't be able to attend this year, because if all goes according to plan, we should be able to move back into our house this Saturday. I'm keeping my fingers crossed.
Posted by Michael Homan at 8:05 AM 6 comments:

All great houses have more than an address, they have a name. We've thought a lot about a name for our newly renovated house, which we hope to move back into in a couple of weeks. In fact we were trying to find a name before it flooded. Therese liked names involving the circus. She liked Homan Circus, but her last name is still Fitzpatrick so that didn't really work. We played around with Alexander Street Circus, and Cirque du Mid-City, but none of those stuck, mostly because Therese hasn't quite reached the age yet where she can grow a full beard, and everyone knows a circus needs a bearded lady. But now at last we have settled on a name: The Mishkan.

Mishkan is a Hebrew word meaning "dwelling place," and it is one of the most common words in the Hebrew Bible, referring to God's home, the Tabernacle. I'm sort of obsessed with the Tabernacle, believing that you can learn a lot about a person, or in this case, a deity, by studying their home. I wrote my dissertation on ancient Near Eastern tents, and later turned this into an award winning book (currently #3,148,555 in sales at Amazon). And to further prove my obsession, I built a scale model of the Tabernacle, as you can see in this old picture. 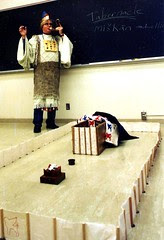 I'm dressed as the High Priest of Israel wearing a costume made from a bedsheet for a Halloween party at the Albright Institute of Archaeological Research in Jerusalem. I'm blowing a shofar in front of the scale model of the Tabernacle and its courtyard. If you look closely you can see a sacrificed cow on the horned altar. Good fun. The actual Tabernacle is the rectangular building towards the back of the courtyard. Here is a more detailed picture of the entire courtyard to the left, and a bird's eye view of the actual Mishkan to the right: 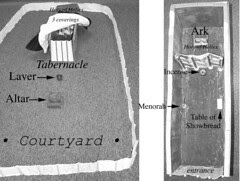 .
Once you enter the Tabernacle, you are in a long room structure with three objects: the Menorah to the left, the Table of Showbread to the right, and the altar of incense to rear. All of these objects, and the Tabernacle as a whole, are very symbolic, and meant to be a microcosm of the universe. These were superstitious people, and they believed they could help the cosmos function by creating a model of it and helping the model function. Behind the altar of incense was a screen, and behind the screen was the holiest relic in ancient Israel's cult: the Ark of the Covenant, which contained the contract between God and Israel in the form of the 2 tablets of the 10 Commandments. If you would like to read more about the Tabernacle, check out this article I authored for Religion Compass.

OK, so you could tell I was obsessed with the Tabernacle from the first picture. Well, in designing our remodeled house I had the Tabernacle in mind. I wanted a long room structure, and I wanted people who entered our front door to have their eyes taken to the back, to the Holy of Holies, which we did by creating a wall of windows. 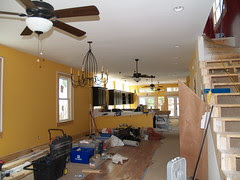 Additionally, we have a chandelier that represents the Menorah, we will soon have a table with bread, and the oven, which is supposed to arrive tomorrow, will represent both the sacrificial altar and the altar of incense. Then in the very back room, where we'll spend most of our time, I guess God will be represented by a 50" Panasonic HD Plasma television. Or better yet, we hope that the spirit of God dwells in our Mishkan. God, and you as well, are invited to come over anytime. We'll provide the libations.
Posted by Michael Homan at 9:56 AM 9 comments: