Today is the 10 month anniversary of Katrina, and I'm tired.

I'm tired of seeing and hearing and smelling and experiencing signs of devastation every single hour of every single day. I'm tired of not being able to rely on mail delivery or phone or electricity. I'm tired of waiting on my government representatives to come up with a plan. I'm tired of grandstanding asshole politicians who claim that if Katrina happened in their part of the country, people would pull themselves up by their bootstraps and get on with their lives and not depend on government handouts. I'm tired of worrying about the strength of the levees. I'm tired of increased violent crime, and seeing armed national guard troops patrol the streets. I'm also tired of meetings. I've gotten pretty politically active in my Mid-City neighborhood to make sure that we residents have a say in the way that our neighborhood is rebuilt. But that means I don't get to see my children as often as I would like, or just relax. And furthermore, I often lose all perspective of what constitutes "normal." I've acclimated to living in a wasteland of a city. I temporarily regain perspective when outsiders visit. As I take them on the grim tour, their facial expressions of astonishment alone remind me that what happened in New Orleans and the Gulf Coast is awesome, unprecedented, abnormal and damn depressing. But instead of going on and on about how little and how much has happened in the past 10 months, I want to share with you what my life is like in New Orleans these days through three pictures. 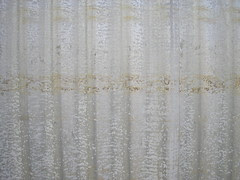 The ubiquitous waterline... I see it everyday as I bike to work. I see it on every single building, on every car that has sat at the same place for 10 months. It causes my mind to flashback to last September when I was living in this flooded city, and replay all the horrible and beautiful things that I witnessed. I've driven 90 miles from where the 17th street canal broke (which is near my house) to the east and not once left a neighborhood that didn't flood. Some worse than others of course. The waterline bears witness to how bad the damage. But not always. Some people didn't survive even when the waterline marks were a "mere" two feet. 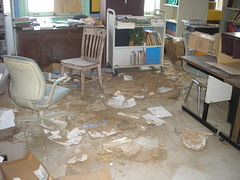 This is a classroom inside Thurgood Marshall Middle School. We used to enjoy hearing their marching band as they paraded through the neighborhood streets in preparation for Mardi Gras. The dogs sure hated it though. But now the school is silent. Katrina damaged the roof of this beautiful 100-year-old building. It hasn't been fixed since. Last Sunday a group of us on the Mid-City Education Committee went into the school to document its status. None of the doors were locked, and except for the many signs of vandalism, it looked like nothing been touched in the past 10 months. The school's former Assistant Principal estimated that there was about $200,000 worth of equipment inside the building, including hundreds of new computers, textbooks, and musical instruments. This school was taken over by the state of Louisiana before Katrina, and it seems that they need some help. We're trying to at least get the building secure and to fix the roof. Then we'll try to open the school as soon as we can. We're trying to get the community more involved in our neighborhood schools and the schools more involved in the communities. We want to do our part to make the rebuilt New Orleans better than it was before. 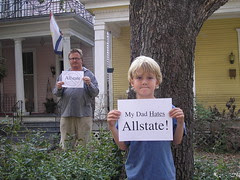 I don't hate much, but at the moment I do hate Allstate. We're involved in a lengthy poker game that they initiated. To the right you can see my neighbor's yellow house. For reasons that only he and God know, his house hasn't been touched since the storm. I've heard rumor that he didn't have flood insurance. Most people in my neighborhood were told they didn't need it, as this part of Mid-City had never flooded before. Even during Hurricane Betsy we were dry. Our house is the leaning pink one to the left. The winds of Katrina racked our house. I was here and experienced the whole thing. But Allstate says that I am a liar. Allstate hired Haag Engineering, and they said it wasn't windy enough during Katrina to make a house lean. So we hired Homepaje Structural and their engineer, of course, said that the winds of Katrina racked our house. So I filed for arbitration, where a third party hears both cases. It isn't binding, but time is running out. We need to file suit against Allstate by the one year anniversary of Katrina. Fighting Allstate, and living in a racked house in a devastated neighborhood is not something that I would recommend to anyone. But at the same time, it has given my life a new and more important purpose.
Posted by Michael Homan at 8:13 AM 3 comments:

Seventy-five years ago today, my father William M. Homan was born in Cedar Rapids Nebraska. He hasn't been doing too well lately. A few months ago he was diagnosed with several types of cancer, and he has additional problems with his lungs. I usually talk to him on the phone every other day. About an hour ago, I called him to wish him a happy birthday. He thought his birthday was tomorrow, but checked his calendar, and agreed that today is his 75th birthday. I wish I could be with him today to commemorate his life. At my age of 40, 75 years sounds like a long time, but I'm sure when I'm 75 I'll feel differently. He said that yesterday he got in another automobile accident, this one minor. He really shouldn't be driving. I wish I could spend more time with him. New Orleans is very far from Nebraska. For the past few years we've offered him a room in our house. But the humidity here in New Orleans would make it hard for his breathing, and all the problems we face after Katrina make the move difficult. Hell, just yesterday the governor sent in the National Guard in an effort to fight lawlessness. And electricity is not reliable, and he would require air conditioning and his breathing treatments. And once Allstate realizes they are screwing us and they pay us what we're owed, we'll have to leave our house for a few months and let some engineers lift the house, straighten the walls, gut the house, and put it all together again. Plus what would he do if the city flooded again? We're trying to figure out a way that he could come down for a few days to see how it goes. I have a short two-week break at the end of August, so either I'll fly or drive to Nebraska, fly or drive to New Orleans, and then take him back to Nebraska, and return home totally exhausted. But for now, for today, here's to you dad. I love you.
Posted by Michael Homan at 3:12 PM 3 comments:

On June 1 something amazing happened, and it wasn't at our anniversary party. The Army Corps of Engineers took full responsibility for the destruction of New Orleans. Prior to this they hinted that the flood waters overtopped the levees. However, thankfully now they have come clean, and admitted that the levee walls were pushed back due to design flaws and poor maintenance. Their massive report took 8 months, and cost $20 million. Ed Link, who headed the task force, said "We say this was a system failure in that the system designed to protect New Orleans failed on many levels, but it also shows how the system -- the business model -- we use to build these things is so flawed. The way we determine need, assess risk and go about funding and approving these things is based on a model that might have been appropriate for the way we lived 50 years ago, but is sorely outdated today." Link said that Congress insists the corps to use an "American business model" that does not use human lives in the equation to measure the cost of projects. This business model also does not adapt easily to changing environmental issues. Lt. Gen. Carl Strock, commander of the corps, said that his agency would accept ultimate responsibility. He said that this was the first failure in the corps history. "This has been sobering for us, because it's the first time the corps has had to stand up and say we had a catastrophic failure with one of our projects," Strock said, and that issue "weighed heavily on our minds." The Times-Picayune was one of only a few news outlets to cover this story. Why is this important? The federal government is ultimately responsible for the tragedy that took place in New Orleans, and as part of this accountability, they need to do more to help us get back on our feet.
Posted by Michael Homan at 8:26 AM 1 comment:

Today a public adjustor named Mike Sanicola is going to come see our house. We're trying to get Allstate to pay us our claim without having to hire attorneys, and we think a public adjustor is the way to go for now. So we'll have to hire our own structural engineer to come see our house and make his/her report. But we noticed something pretty amazing in the cover letter to the Haag engineer's report. Those were the guys hired by Allstate who said that it wasn't windy enough during Katrina to make a house lean. On the cover letter denying payment, Allstate writes that they are denying our claim because "We do not insure a loss directly or indirectly caused by a flood that is already in progress at the time and date: 1. the policy begins; or 2. coverage is added at your request." It seems they think we tried to add flood insurance during the storm, though we had flood insurance with Allstate for many years before Katrina. The engineers also have a picture of a door in their report that does not belong to our house. Elsewhere they call the damaged structure "The Wilson house," so maybe the door belongs to the Wilsons? In any event, our ongoing battle should ultimately be made easier by Allstates numerous screw-ups.
Posted by Michael Homan at 12:49 PM No comments:

Fifteen years ago today, Therese Fitzpatrick married me. That is a good thing. Today is also the start of hurricane season. That is a bad thing. At our wedding reception in Omaha there was a tornado and everyone had to go to the basement. This evening we're having a party at our crooked house, and we're hoping that it will go off without a hurricane showing up. Thing is, tornados are more apt to show up announced.