Note: Today James Gill has a very entertaining piece carefully comparing the reaction by New Orleanians to both Mathews and Spoons Butler. His point was that people in New Orleans hold grudges. Not surprisingly, I can't find Gill's piece on nola.com.
Posted by Michael Homan at 12:28 PM 1 comment: 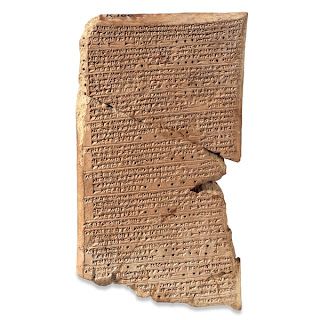 Observing the planet Venus is also key to understanding chronology in the ancient Near East. This is mostly because of a cuneiform tablet known as the Venus Tablet of Ammisaduqa which was part of the library unearthed at Nineveh. While copies of this text tend to date to the 8th and 7th centuries BCE, the text is believed to have been composed much earlier during the reign of Ammisaduqa, who ruled Babylon about a century after Hammurabi. The tablet records the exact date of the heliacal rising and setting of the planet Venus for 21 years. Modern astronomers use these dates to reconstruct when the referenced 21 year period occurred. The problem is that there are questions about the accuracy of the recordings, and that the events recorded accurately fit into three different time periods. Thus scholars must choose between the so-called High Chronology, Middle Chronology, and Low Chronology. Thus Hammurabi's reign begins in 1848 BCE, 1792 BCE, or 1736 BCE. I'm personally a Middle Chronology kind of guy. So Hammurabi was reigning in 1769 BCE, and James Cook recorded the Transit of Venus in 1769 CE, and in another 1769 years, I'll be dead.
Posted by Michael Homan at 10:02 AM No comments: