Kalypso and I are in Paris trying to blend in with the locals. 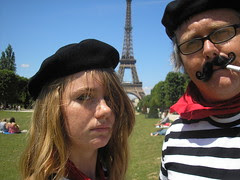 We've found Paris to be very expensive, so we tried to make some of what the locals call $ argent $ by playing French music near the Eiffel Tower. It didn't work, so we tried to pretend that I had Tourette's Syndrome. Still no money from the stingy Parisians. Sacre Bleu! Watch and learn mes amis:

Kalypso and I are heading off to Jordan. Tomorrow we fly to Paris where we'll stay for a few days, and then we're off to Jordan. We'll be joining some old friends in the south of Jordan conducting an archaeological survey in the Wadi Barqa. Haven't been in Jordan for about 10 years, and can't wait to get back. It's such a magical place.
Posted by Michael Homan at 5:28 PM 4 comments:

Jury duty is finally over, thank God. It was emotionally draining and I continue to think about the ramifications of the verdicts upon which I voted. We were asked to make decisions after being presented with a very limited amount of information. We could ask no questions, and we couldn't even take notes. Moreover, I don't have much confidence in the idea that people are tried by a jury of their peers. I vividly remember being in the jury pool room and suddenly the entire room broke into applause. Turns out some guy had spun some wheel on the game show Price is Right and he won $1,000 or something. I wouldn't want game show fans to decide my fate. Also, the worlds that I heard about while serving on juries, a world where children have access to drugs and guns on a daily basis, where friends and family are lost to gun violence, I don't consider myself a peer to people from that world. I can empathize but I have no idea about the hard realities of that life. The experience reminded me of Aristophane's famous comedy Wasps, where the elder Philocleon gains pleasure from bringing guilty verdicts on the younger generation. However, I gained no pleasure.

My bad experiences on jury duty also make me think of the controversy surrounding Supreme Court nominee Sonia Sotomayor. She said in a previous speech "I would hope that a wise Latina woman with the richness of her experiences would more often than not reach a better conclusion than a white male who hasn't lived that life." Some have called her a racist for this statement. But I agree with her. Her experiences would make her better suited than me to judge others from that background. I by no means am advocating separate courts for separate classes, but I would argue that there needs to be diversity on all levels of the judicial system.
Posted by Michael Homan at 8:17 AM 5 comments:

I recently published an article entitledService-Learning, Biblical Studies, and Resurrecting Flooded Bones in New Orleans on the Society of Biblical Literature's Forum site.
Posted by Michael Homan at 5:17 PM No comments: