We are excited to announce that we have a Little Free Library in front of our house. People are free to take a book or leave a book. Neighbors have been great about keeping it stocked. Many thanks to Mark Gstohl for building and installing it. Therese now is looking for an alligator to adorn it, as the library sort of looks like a Cajun Cabin. 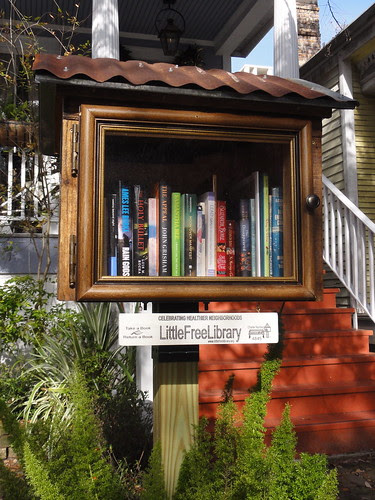 Today I am 47-years-old. To take advantage of spousal birthday guilt I bought a freezer. Therese hates it because we have no good place to put it, but it's my birthday. I also bought an analog refrigerator thermostat. Why? Well for the first time in my life I am going to brew a Bohemian Pilsner beer. To do that I need to be able to ferment the beer at a constant 50 degrees. Brewing in a controlled colder temperature was one of my two brewmeister goals this year. My second is to switch from bottles to kegs, but I'll do that later.
Posted by Michael Homan at 12:31 PM No comments:

The Super Bowl will be played in New Orleans in a couple of weeks. Nobody I know is that excited. Quite the opposite, as never before has a Superbowl been held in a city that has so much hatred and anger towards the National Football League. It's not because of the construction and sign police and all of the other nonsense, but it's because of Roger Goodell and "bounty gate." His unprecedented suspension of coaches and players crushed this city. I think there is a good chance that Roger Goodell will get punched, and I'm hopeful that he gets booed loudly during the game. But at least the Atlanta Falcons lost in the NFC Championship game. It was a nightmare to think about Goodell handing the Falcons the Lombardi Trophy inside the Superdome. I believe that Goodell's suspensions cost the Saints several games, and that they would have been in the playoffs again without that draconian punishment. This also hurt the value of my season tickets. But today Sean Payton was reinstated as coach, and the Saints should be pretty good next year, if they can fix their defense.

This past football year overall was the worst one I can remember. My favorite college team, Nebraska, did what they always do under coach Bo Pelini. They have at least 9 wins and four losses each of the five years he's been coach. They lose big games. They haven't played in a BCS game since 2001. While it wasn't nearly as bad as the 2007 Bill Callahan season, it was painful. Hopefully a playmaker will emerge on defense, and QB Taylor Martinez will continue to improve for his senior year.
Posted by Michael Homan at 10:54 AM 1 comment:

The Replacements' song "I Can't Hardly Wait" has a special meaning to me. It was the closing track to one of my favorite albums:  Pleased to Meet Me. But my connection to the song was solidified back in the summer of 1999, when I said goodbye to my wife and daughter who were soon to be living more than 7,000 miles away from me. The song spoke sadly about being apart, and states "I'll be home when I'm sleeping, I can't hardly wait." That simultaneously made me feel both pain and hope.

Therese, Kalypso and I had been living in Amman Jordan at the American Center for Oriental Research. It was an amazing year. For the first and only time in my life I was able to visit the remarkable countries of Syria and Lebanon. I traveled to Egypt with Kalypso and my birth mom. In Jordan we attended the funeral of King Hussein. I remember Kalypso saying in a crowd "I am so sad that King Hussein died." Many people nearby were touched and came up to see her, and as often happened then, to touch her hair. The nostalgic mood ended when Kalypso said "I get boogers." The magic died. At the close of the my fellowship in June of 1999, Therese and Kalypso were heading back to UCSD in San Diego, and I was heading to south Jordan to excavate Jebel Hamrat Fidan. It was very hard to say goodbye, knowing I would miss Kalypso's 4th birthday and so many other things. I played the song "I Can't Hardly Wait" repeatedly. I cried quite a bit when their taxi drove away.

I've always been a sucker for sad songs about being apart. Songs such as "How I Wish You Were Here" by Pink Floyd, "A Few Hours After This" by The Cure, "Leaving on a Jet Plane" by John Denver, and "Homeward Bound" by Simon and Garfunkel come to mind as some of my favorites.

Here's the original version of the song about suicide, it was an outtake from the album Tim. Notice Bob Stinson rocking out on guitar, the song is far less poppy than the later more famous recording:

Finally, here's the homesick version from Pleased to Meet Me. I also learned today that Alex Chilton played guitar on this version. That's cool:
Posted by Michael Homan at 11:53 AM 1 comment: