I believe that Stephen Colbert has done a better job than anyone in exposing the ridiculous nature of campaign finance laws in this country. Thus, I contributed $25 to Stephen Colbert's Superpac. Then, on Monday night's show, he aptly pointed out that I am in fact a hero. Check out this picture: 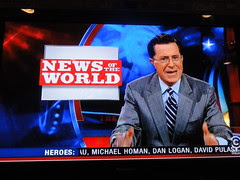 Posted by Michael Homan at 12:00 PM No comments:

Wide-Eyed Among the Believers: Ralph Adamo Goes to the Republican Leadership Conference in New Orleans

Ralph Adamo on the RLC’s third day
On the final day of the RLC’s New Orleans meeting, the most anticipated speaker was Texas Governor Rick Perry, a man who looks the part of a feckless president in a government noir film, and who in real life is not afraid to press really hard on the right wing’s sorest spots. His biggest applause line came when he decried illegal immigration, and his bragging was focused on Texas’ new tort ‘reform’ measure that says “loser pays,” on the new law requiring voters to produce a photo ID, and the new requirement that any woman considering an abortion be shown a sonogram of her womb. He also claimed to be saddened by Republicans who “duck and cover at pressure from the left” when social issues are under discussion. Perry’s oration had the rehearsed polish the audience might have craved, but the accent in which it was delivered had an uncomfortably familiar ring.
The afternoon saw mostly the same notes being played over and over, except for the discordant one struck by the hired Obama impersonator, who mocked aspiring Republican candidates as much as the president and was finally shut down by RLC organizers. The other discordant note was struck by Buddy Roemer, who told the uncomfortable truth about money and politics, and did not exempt his fellow Republicans from blame in turning the country’s interests over to lobbyists and corporate money. The attendees listened a bit nervously, but Buddy has a way of carrying on with his train of thought in a quiet, persuasive way. The danger he presents to the party is one he’d never overcome even if miraculous numbers of $100 and less contributions flowed in: his narrative puts the party out of business. Got to love his crazy truth-telling, no matter how wrong he might be issue by issue.
When Ron Paul won the straw vote by more than 300 votes more than his nearest rival (Jon Huntsman, himself well ahead of Bachman and Cain, the only other aspirants to reach a hundred votes), a big portion of the crowd in the hall booed loudly. Later, in the halls, one could hear many people telling their companions that Paul’s organized dominance of the vote, which he won four years ago too, rendered the vote itself meaningless.
All in all, hearing the candidates and their supporting casts (like Tony Perkins of the Family Research Council) talk was dispiriting; the negative cast of mind in which these RLC attendees dwell cannot be good for their health, or anything else. The country they dream about would scare many of them to death if it existed, a sort of sentimental police state with plenty of ‘exceptionalism’ for the ambitions of the morally righteous. The battle for this nomination promises to become uglier, and to reveal much of the republic’s scar tissue in the process.
Posted by Michael Homan at 9:43 AM 1 comment: