The past decade, with its wars, inhumanity, and government incompetence, was not a great one. I'll let others summarize the big picture. But here is a summary of things that happened to me personally during the past decade:
Happy New Year, and may your teen decade be blessed.
Posted by Michael Homan at 10:21 AM 6 comments:

2009 was a Christmas to remember. Or to forget. Our car is still in Omaha. It needs a new transmission and drive axle. It will cost more than $5,000, and it won't be ready until late next week at the earliest. My father-in-law graciously allowed us to borrow his van to get back to New Orleans. School starts for the kids already next week, and we have many work related projects to complete before the New Year. But back to the Christmas from 2009:
My favorite gift was a Saints gnome. I also got fleur de lis cuff links and tattoo, a boot scraper, an oven liner, a blue vase, some dessert wine, an ornament, and some pistachios. I also got about $350 cash. I forget what else. All it cost me was three seventeen hour drives to Omaha and a $5,000 transmission.
Another way to look at is this picture, of the newest generation of Homans, cost $5000. 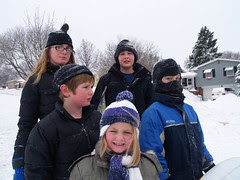 Sure it's cute. It's Kalypso, Cedric, Lena, Zane, and Gilgamesh. But for $5,000 Gilgamesh should have removed his face mask. But being that the high temperature was 5 degrees, who can blame him?
We also got this picture of my mom and my siblings: 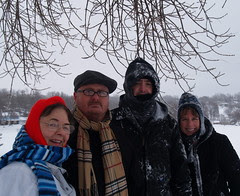 Surely that's not worth $5,000. I like the picture though. And in any case, I could have taken the same picture next week when I have to drive back to Omaha to get my car, which needed a new transmission, which cost more than $5,000 as I might have mentioned earlier.
Screw you Santa! And Omaha, if and when I get my car back, you probably won't be seeing me for a while.
Posted by Michael Homan at 1:58 PM 2 comments:

We've been leaking transmission fluid in our car, and there has been a giant blizzard the past two days. We were supposed to be driving back to New Orleans today, after a week in Nebraska. Anyway, we took our car in today to La Vista Toyota, and they said we have a bad seal to the transmission pump. The won't be able to get one in stock until Tuesday. We tried to drive anyway thinking we could stop every 100 miles and add transmission fluid, but we only made it a couple of miles when we decided we'd better turn around. There were dozens of cars in the ditches, and the car wasn't handling right. When we pulled over the transmission fluid was nearly empty, so we put in transmission fluid and drove back to my mom's house. At 6 AM Monday we'll drop it off again at La Vista Toyota.
All of this creates several problems. One that I solved is that Howie will be using my Saints tickets. Howie suggested I email them to him and I was able to do this on the Saints website. We're still trying to get in touch with the neighborhood guy who has been taking care of our dogs. We need him to know he has to continue if possible and also check in on the guinea pig, the parrot, and the sugar glider. I had to cancel my doctor's appointment for Tuesday. We don't know what to do with the guys who are working on our solar panels. They were supposed to meet me early Monday. Anyway, we have several big headaches, and let me tell you, I know what it means to miss New Orleans. We are still more than 1000 miles away and wishing we never left.
Posted by Michael Homan at 6:47 PM 3 comments:

If You're Curious About The Saints...

Read the article entitled Saints the Soul of America's City by Wright Thompson. It's a longer article than you are expecting, but he really captures what this team and this season mean to this amazing city.
Posted by Michael Homan at 11:11 PM 1 comment:

I just finished watching the first season of HBO's series Rome. It's brilliant, and it reminded me of one of my favorite teachers at the University of Nebraska at Omaha: Dr Marion Nelson. Back in the late 1980's I took several courses from her, two of which were Roman Republic and Roman Empire. It was her passion for the past and her amazing ability to synthesize stories that persuaded me to major in history. Thanks Dr Nelson.
I can't wait to watch the second and final season, though I've heard from my friend Nana Friedman (a classicist from Oxford and a Jordanian dig buddy) that it's not quite as good as the first season.
Posted by Michael Homan at 5:00 PM 1 comment:

The Doctor Will See You Now

It's been about 20 years since I visited a physician for a check up. I'm not much of a fan of the modern American medical industry. My distaste comes from working at various hospitals and nursing homes when I was younger. I encountered quite a few medical shysters, and the way the system was set up with the insurance industry made me upset. I also don't like the enormous wait times and having to wear backless gowns. Plus, now I'm at the age where there will likely be something, either a finger or a probe, inserted into my backside. A couple of years ago I made an appointment to see Dr. Paul Gailiunas. I read quite a lot about him, and I was a huge fan. He seemed to clearly be in the medical field to help people. Dr Paul moved away in 2007 after his wife Helen Hill was murdered. So now that I'm in my mid-40's, I think it might be time to get checked out. I just made an appointment to see Dr Azikiwe Lombard with the Tulane Multispecialty Center on December 29th. I've never met Dr. Azikiwe, and I'm hoping the visit and the diagnosis go well.
Posted by Michael Homan at 12:44 PM 1 comment:

More Evidence That We're Fighting Over the Soul of America

Yesterday in the House Committee on Oversight and Government Reform, a panel of health professionals asked for continued federal support for the damaged health care infrastructure in New Orleans. The following debate occurred:

"Is everyone so poor in Louisiana that the state cannot do more for you? Are you going to be a permanent ward of the federal government?"
Rep Darrell Issa, R-California

"You're trying to keep alive a health infrastructure to assist people, and we are getting ready to spend $160 billion next year on a stupid war in Afghanistan. If we can't see that New Orleans is still suffering, if we can't see that New Orleans has a health-care infrastructure that is not adequate to meet the needs of people who are still recovering from the hurricane, if New Orleans has to come with a tin cup to beg for money for clinics... Our country is falling apart, and what's happening in New Orlenas is a signal condition of where America's priorites are totally fouled up."
Rep Dennis Kucinich, D-Ohio

There are two things impacting my life right now in a very positive way. The first of course is the 11-0 Saints. I believe tight end Billy Miller when he writes that the Saints are New Orleans. Miller documents the many less-than-stellar backgrounds of players that somehow together make up the best team in football. It's such an amazing story.

Second, did you check out Steven Seagal: Lawman on A&E last night? It's zen, tasers, car chases, martial arts, and yellow-tinted-sunglass-wearing-ass-kicking in Jefferson Parish. The best part is that Seagal has no idea how ridiculous he is. People in the New Orleans area are now trying to find new ways to get arrested in Jefferson Parish just in case superstar lawman shows up, puts his boot on our necks, and gives us a much deserved lesson in martial arts and hair gel.
Posted by Michael Homan at 9:30 AM No comments: