Yesterday was the five year anniversary of the reopening of the Superdome. It was one of the most memorable days of my life. I wrote about it here. Here's a picture of me and Mark Gstohl at the game. 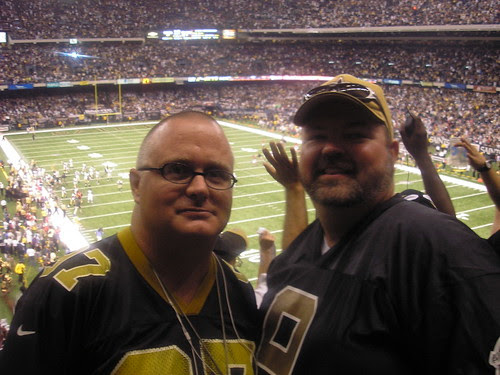 All last week the Times-Picayune ran articles about that amazing event. There were behind the scenes interviews with the players, coaches, musicians, workers, and broadcast professionals. Some of my favorite stories were from the ESPN crew about how that game was by far the most emotional sporting event they had ever witnessed. I found amusement in the quotation from Saints' owner Rita Benson LeBlanc about the Skids' song "The Saints Are Coming." She hated the original and described it as "an extremely harsh and barely understandable punk song." Saints players and coaches spoke about how it was the most memorable game that they had ever participated in, and the noise level in the Dome after the blocked Atlanta punt and subsequent touchdown has never been matched anywhere. 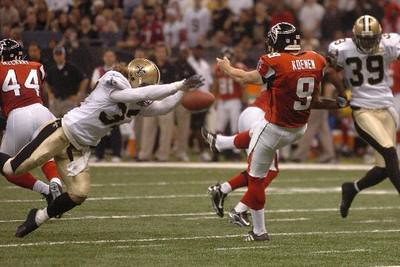 Steve Gleason, the Saints' player who blocked the punt, was featured on the front page of yesterday's paper. He announced that he has ALS, commonly known as Lou Gehrig's disease. Gleason, like my family, moved to New Orleans, fell in love with the city, and decided to plant roots. There is much to admire about Gleason. He was at the Dome yesterday, and he served as honorary captain. It looked like he was having a hard time walking. Seeing him supported by Drew Brees, as he walked to center field grabbing the back of Brees' shoulder pads, and then upfield to start the "Who Dat" chant, well, it took my breath away. Here was an NFL athlete whose heroics five years ago caused our city to be able to boast to the world that we were strong, and we were back, and we didn't suck any more.

Thanks Steve Gleason. Words can't express how much your actions from five years ago until today have meant to me.
Posted by Michael Homan at 12:17 PM 3 comments: 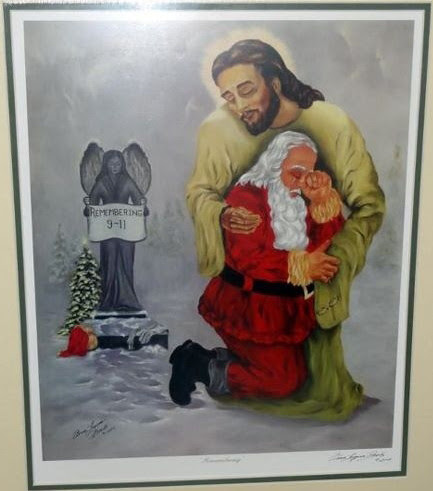 Yes, that's Santa having a hard time with 9-11, and Jesus is there to comfort him. Santa, overcome with grief, took off his hat and gloves at that angel statue, but then fell to his knees sobbing. Poor Santa. I've thought about the image quite a bit, and I've decided that the best thing to do for America is for me to make money off of the tragedy of 9-11 with a Christmas song. It's so sad it will have to be a country tune. All I have at the moment are the lyrics, but I think they're good enough for a Grammy or the country music equivalent (Hee Haw Award?).

(verse 1)
The terrorists weren't thinking of Santa, when they made their evil plans.
They hated our freedom and Christmas cookies and Grandma's glaze-baked ham.
So they jacked four planes, took thousands of lives, when they crashed them from the sky.
But you crossed the line you SOBs when you made dear Santa cry!

(Chorus)
Santa Clause didn't come to town, on the day terrorists knocked the towers down.
So let it all out Santa and dry your eyes, with a Jesus hug from the Lord Christ.
And cheer up Santa, we'll get revenge, we'll destroy their countries with bombs so then,
return Dear Santa to the north pole, and come 12-24, Let's roll!

(verse 2)
Nothing rhymes with Khalid Sheikh Muhammad, but we'll water board his ass 183 times for vice.
And on Christmas Eve he'll get no presents, cause Santa knows who's naughty and nice.
And Osama bin Laden, you deserved to die, for causing all of these tragedies,
But apologies to Saddam Hussein, cuz there were no WMD's.