Yahweh it turns out is a pretty popular deity, with more than half of the world's population worshipping him today. There are a couple of passages in the Hebrew Bible that seem to indicate a notion that Yahweh originally came from southern Jordan, or what was called Edom during the Iron Age. One example is Judges 5:4, one of the oldest poems in the Bible:

"Yahweh, when you went out of Seir, when you marched out of the field of Edom, the earth trembled, and the heavens dropped, the clouds also dropped water."

I think you can learn quite a bit about a person by visiting their home. So it was nice to return to southern Jordan this summer, an area where I spent quite a bit of time in the late 90's. I very much enjoy walking around in the desert, and I don't find it surprising to read about so many people in history having encounters with Yahweh in the desert, including Moses, Jesus, Paul and Mohammad. Heck, even Billy Jack had religious experiences in the desert, though I don't think it was with Yahweh. Anyway, Yahweh's home is a beautiful, serene, and harsh environment. While I didn't hear Yahweh's voice, or even see a burning bush, it was a pleasant experience just the same. Plus, I'm glad God didn't appear to me and ask me to deliver any messages. I'm pretty busy getting ready for the Fall semester. Here is a picture of Yahweh's home, taken early one morning, and yes there is a bush there, but it wasn't on fire... 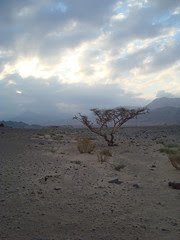 Posted by Michael Homan at 1:23 AM No comments:

Out of the Loop and in the Wadi

Kalypso and I are just about finished with our survey work in the Barqa area near Wadi Feinan, Jordan. About another week left. We're currently in Aqaba and will do some snorkeling later, but for me the big news is as follows: I just survived 25 days without internet, newspaper, television, radio or any media. I feared that my first contact with the outside world would reveal something like "President Biden declares war on Mexico". Luckily, that never happened. I also just went through more than 1,000 emails. We're looking forward to heading back to New Orleans on August 1st, but for now, we'll just have to keep walking around and looking for flint and pottery.

Here are a few pics before I run, or swim as the case might be:
First, a very angry camel. Can't get enough of the camels out here. 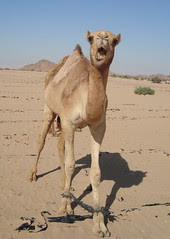 Second, here is what the spectacular desert terrain looks like in our survey area. It was unusual for there to be clouds that morning. 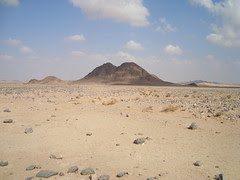 Third, here is Kalypso on a sand dune. 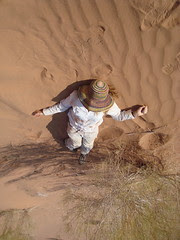 Lastly, here is a picture of me and my team trying to figure out where to go survey next. 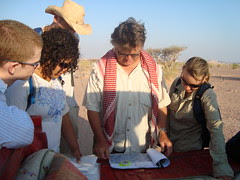