Katrina Compared to Every U.S. Flood for the Rest of My Life

First, why I hate America...
Fargo is still on the verge of massive flooding and my prayers are with those people. But today I discovered that Neal Boortz is comparing Fargo's Red River to New Orleans' Katrina. Says Boortz:
What is worse is the comments below. Seems people really hate New Orleans and feel no guilt about the way the government handled this situation. And this blaming New Orleanians is the same thing that happened when Iowa flooded, with Rush Limbaugh characterizing us as whiners, rapists, and murderers, while Iowa and Illinois represented "the backbone of America."

This same comparison will happen with every flood for the rest of my life. If your city does better than New Orleans did during our flood than congratulations, but you really ought to set your standards higher. Then there is the apples to oranges comparison due to historical and social context, but that is far too complicated to impact the uncurious.

Second, why I have hope for America...
After the University of Iowa campus flooded, students at my school raised money for their campus. Students at my school also spent their Spring Break in Galveston helping to gut homes after Hurricane Ike. Plus I've met many of the thousands of Americans who have come to New Orleans these past 3 years to help us rebuild.

To the people of Fargo, I can assure that the people of New Orleans and the Gulf Coast are thinking about you and hoping for the best. And if you flood, we will help you in any way we can.
Posted by Michael Homan at 5:26 PM 1 comment:

My life is dramatically better today because I wisely purchased two products to change the quality of my life.

Exhibit A is this Indiana Jones Voodoo Doll keychain I just got from Geek World: 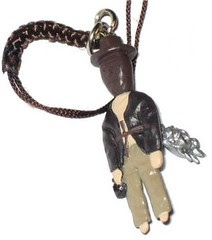 Exhibit B is a swim-suit clad buxom rubber chicken with bunny ears. It honks when you squeeze it, our dog Kochise both hates it and loves it, and I call it "Therese." We got it at Petcetera on Magazine Street, and I see they sell it online. They call it the Playbunny Chicken:

Why We Went to Thibodaux

I'd never been to Thibodaux before, though I'd heard about it in many Cajun songs, most notably in "Jambalaya (On the Bayou)." So yesterday we all got into our car and drove down to the Bayou Lafourche. We went because a former student of mine at Notre Dame Seminary, P. J. Madden, was saying mass at St. Genevieve's Church. He's heading back to Ireland soon, and I wanted to make sure I saw him "in action." He was great, and I was told by several parishioners after mass about how much they are going to miss him. I also have never received communion from a former student, so that was very special. P. J. was someone who decided to be a priest later in life, and I have always been struck by his ability to exemplify the positive components of Catholicism through his actions. Sort of reminds me of Tim Russert in that sense, someone who "walks the walk." Here's a picture of P.J. from 2004: 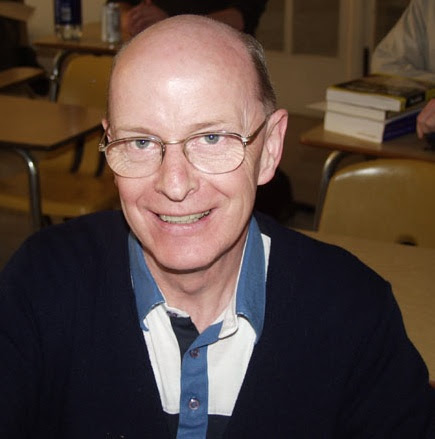 Even my kids, who are typically bored to death by priests during mass, said he was entertaining. I think this is because he explained the rituals, and his enthusiasm for the liturgy was contagious.

After mass we drove through the campus of Nichol's State University, which was a beautiful campus. Then we headed to Zam's Swamp Tours. 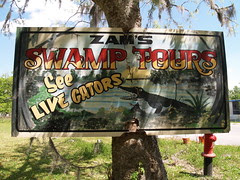 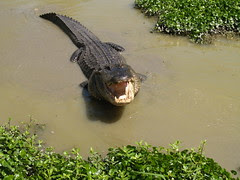 I would like to head back to Thibodaux during the sugar cane harvest. I'm interested in the process of turning the cane into white sugar. Similarly, on my list of things to do is to better understand how crude oil becomes gasoline, vasoline, etc.
Posted by Michael Homan at 1:50 PM 3 comments:

I Learn That Some Contracts Are Unbreakable

In post-Katrina New Orleans, many have been suprised to learn that AIG chief Edward Liddy has been ardently defending the sanctity of contracts in order to pay $220 million in bonuses to the troubled company. But previously, Mr. Liddy ran Allstate Insurance from 1995 until 2006. Many people in the Gulf Coast are painfully aware that contracts between homeowners and the insurance industry didn't mean too much back in those days. Of course the Louisiana Insurance Commissioner Jim Donelon defends Liddy, as Donelon continues to be the industry's model rep and unofficial spokesperson. One day when Donelon gets defeated I'm sure there will be a cushy insurance industry lobbying job waiting for him à la Montana's Marc Racicot. Either that or he'll wind up in jail like so many former Louisiana insurance commissioners.

Read more about it in this excellent article in the Times-Picayune: "Contract Sanctity at AIG, but Not Allstate?" by Rebecca Mowbray
Posted by Michael Homan at 8:18 AM 1 comment:

To celebrate St. Patrick's Day I was going to do some research on diseases that make one's skin turn green. But in my quest I came across the following question on WikiAnswers: "Why does my skin turn green when I sit on potatoes?" While I sadly didn't know the answer, I am smart enough to know that we're missing important pieces to the puzzle. In the discussion section I posed these important questions:

1. Are you or is anyone you know Irish?
2. Were you wearing clothing and if so, was that clothing green or a combination of blue and yellow?
3. When you say "potatoes" do you really mean "parrots"?

I sure hope we can help this poor person, and happy St Patrick's Day everyone.
Posted by Michael Homan at 8:49 AM No comments:

They are claiming that I under-reported my 2007 income by $50,000. This also put me in a higher tax bracket and then my deductions for things like student loan interest payments were no longer valid. This relates to a investment of about $50 K I purchased in May of 2007, when my Road Home money came in, and October 2007, when I sold the stock to start paying Abry Brothers to start fixing our house. So on the one hand I'm lucky that the IRS isn't focussing on all of the $150,000 we received from the Road Home, only 1/3 of it. Congress decided that Road Home money isn't taxable, so while I'm sure I'll win this argument in the end, I'm also sure it is going to take much time and effort to convince the government to get off my back.

I'm curious if there will ever be day in the rest of my life that isn't complicated by Hurricane Katrina related factors.
Posted by Michael Homan at 12:26 PM 1 comment:

Chimpanzees have been on my brain quite a bit lately. I don't mean "on my brain" like the Connecticut chimp Travis getting to gray matter by ripping off someone's face because he was jealous about an Elmo doll present. No not that. It has more to do with some things I've learned about Louisiana, and because of a recent negative classroom experience.

I've recently discovered that Louisiana is home to a giant primate research facility as well as a chimpanzee retirement home. The research facility is called the New Iberia Research Center, and it's in Lafayette. Occasionally I hear about monkeys escaping. That intrigues me, the idea of pharmaceutically mutated monkeys going into the swamps and mating with alligators. But then north of the research center is a chimp retirement home called Chimp Haven, and it's in Shreveport. Then this weekend, driving through Shreveport and Lafayette, This American Life had a story about retired chimpanzees and it discussed both of these facilities. I was amazed to hear about Cheetah, the chimp from the Tarzan TV show, well it turns out his favorite thing to do is to watch reruns of his acting. The show said chimps can only be used in movies from the age of 1-4, and then they are too strong and awnry to act. The show also said that chimps who were in research facilities like to watch General Hospital because they are used to humans in labcoats. The show also discussed why humans won't euthanize chimps, though we do every other animal.

Then yesterday in my Freshman Seminar class we were discussing Xavier's mission to create a more just and humane society, and I brought up the topic of animal research. I asked my students why humans won't euthanize chimpanzees? Several students commented on the irony that we don't put them down for the same reason we use them for testing, namely that they are the closest species related to humans.

Well this really upset one of my students, who angrily proclaimed that she wasn't related to a monkey.

This was dangerous water to tread, especially after the New York Post cartoon about Obama. So I asked her about this further. First I said that I had a friend who would be very upset that you called a chimp a "monkey" because it is in fact an ape. Then I said that you would have to admit that chimps are more closely related to humans than a rabbit. She said no, both have no relationship to humans. OK then, I said, what about a rock. Chimps are more closely related to humans than a rock, right? No, she said, chimps are not related to humans. That's the way the class ended. Not my best pedagogical moment, mostly because I was astounded at the ignorance. So I came up with this chart that I'll use in my next class. Maybe that's all that was missing, a visual aid. 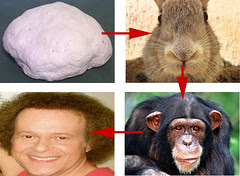 Carnival comes from a Latin phrase meaning "farewell to flesh," due to the fact that it was a celebration that ended with meat abstinence. Well this year I'm trying to go 40 days without eating corn products. That isn't easy for a Nebraska boy, so why shun that which is shucked? About a month ago I watched a very interesting documentary called "King Corn." It focused on how our government subsidizes very unhealthy food, especially high fructose corn syrup, and corn fed animals, in order to reduce the cost of groceries.

So I'm doing my best not to eat any high fructose corn syrup, or animals that were fed corn. I'm also going to make an effort to try to buy more locally produced food to try to reduce the amount of corn ethanol used in transporting my future meals. But in the spirit of full disclosure I actually benefit quite a bit from government subsidies to corn farmers, as my two siblings and I jointly own a farm in Cedar Rapids Nebraska, where our tenant farmer grows, you guessed it, corn. What the heck else would you grow in the Cornhusker state? 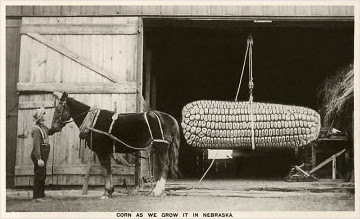 As I think back on this year's Mardi Gras season, my favorite memory took place the morning of Mardi Gras day on North Rampart Street. We recycled our Barkus outfits, and so my family of Batman villains was strolling along, and the following conversation was overheard concerning Gilgamesh's green costume:

Guy No. 1: Shhhiiiiiiiiiittttttt..... what the Hell is that, the God damned Green Latern?
Guy No. 2: No man, that's the Mother Fu#king Riddler!

You see, even Mardi Gras can be used as a pedagogical device. 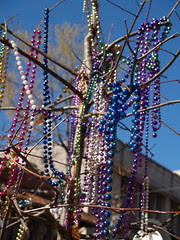