The Die is Cast

My father-in-law, John, who is professionally an insurance adjuster following storms (storm trooper), just called. He was very choked up and said several things that were pretty sobering. He said that Katrina is the storm of the century, and that there is a good chance that I won't be able to have contact with the outside world for several weeks. I told him that it really is too late to leave the area. He said he was worried about my mortality. Me too! We even said that we loved each other. Gosh, must be pretty serious for me to say things like that to my father-in-law. For those who don't know, I am not very good at expressing emotions. Sort of like Spock. It is a bit breezy now and a few scattered showers from the outer bands. On the TV they are advising to take an axe up to your attic. I guess when Hurricane Betsy came back in the 60's some people died in their attics. Their homes were flooded, they rose to the attic, but were trapped there and they drowned. The dogs are sleeping, and I think the loud tv's blaring ominous warnings are bothering them.
Posted by Michael Homan at 4:42 PM 27 comments:

Soon in a Town Near Me 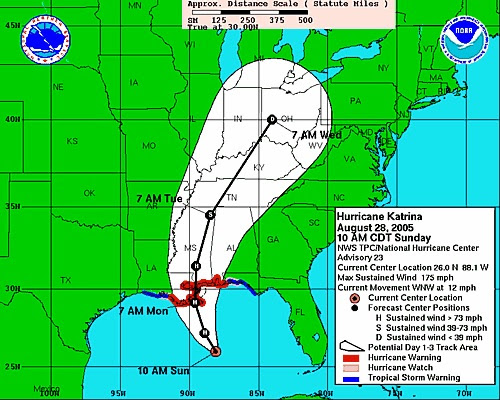 Therese and the kids are in Purvis Mississippi, which will have major wind problems, but should not have the flooding that is predicted to hit the New Orleans area.
Posted by Michael Homan at 2:14 PM No comments:

Hurricane Katrina has her eyes set, seemingly, on my fair city of New Orleans. Therese and the kids are either heading to Jacksonville or Purvis Mississippi at 4 AM Sunday morning. Me, the dogs, and various other critters are battin' down the hatches. Xavier has shut down the server. If you need to email me, please use mmhoman at yahoo dot com at least for now. If you are a student, I know they shut the blog down Saturday, so the first week's blog won't be due until later. Relax and survive.
Posted by Michael Homan at 6:40 PM 5 comments:

Race has become a very divisive topic in New Orleans over the past year. On December 31st, 2004, an African American college student died at the hands of some white bouncers at Razoo's Nightclub on Bourbon Street. Allegedly the altercation started when the student was stopped for a dress code "violation." Several subsequent studies revealed that on Bourbon Street a double standard applies to dress code and drink prices: whites were much less likely to be stopped by bouncers for dress code "violations" and they were charged less for drinks. Then the new District Attorney, Eddie Jordan, who is an African American, was found guilty of racial discrimination when he fired many white employees after taking office. Even our mayor, Ray Nagin, commented at length about racial divisions in April.

At the moment, the debate about race has centered on the fate of the Lusher schools. Lusher Elementary is a great school. My wife, Therese, used to teach there, though now she is a reading specialist at Audubon. But our daughter goes to school at Lusher, and our son will go there next year. But in the eyes of many in New Orleans we are elitists and contribute to a new form of racial discrimination and segregation. New Orleans public schools' students are about 98% African American. But at Lusher, African Americans make up only 50%, whereas whites are 40% and "other" are 10%. It’s not easy to get your kids in to Lusher. They take all children that live in their surrounding area, but it is not easy to buy real estate or afford the rents in their uptown neighborhood. Most of their students do not live in the Lusher neighborhood. It is a magnet school, and great test scores aren’t enough, as there is a long waiting list and even a “lottery” they use to decide who gets it. But honestly, it’s New Orleans, and nepotism and connections are the main criteria. Some of the richest families in town send their children to Lusher, politicians do likewise, and even the former school president Anthony Amato's children go there. Most of the faculty at my university send their children there.

Lusher tried last spring to open a high school, but there were some allegations that they didn’t go about doing this by the proper channels. The school board voted them down. Now the parents at Lusher are upset and are trying to change Lusher’s status so it would become a charter school, not having to take direction from the school board. Therese is in favor of Lusher becoming a charter school. She is not alone. Of the 948 votes cast by parents, 921 were in favor of becoming a charter. But I’m against it. I believe this move is motivated by retaliation. Lusher will get the high school they want in time, and I see parallels between becoming a charter with what happened to public education following desegregation. Here in the South, when the federal government ordered desegregation, whites fled to the suburbs and placed their children in private schools. The result is that New Orleans public schools are among the worst in the country. People have the attitude that their tax money should not be spent to educate these poor people who will be doing manual labor the rest of their lives. I wanted to fight the system. We live in the heart of New Orleans, in Mid-City, and purposely placed our children in public schools. We want to fix the problem and not run from it. I see this move to become a charter school as just another example of white people selfishly running away from a problem about race. But I'm not about to pull my children out of Lusher. I believe it is my job as a father to provide for them the best education they can get. But I do believe that if we could just do away with private and magnet schools that education in New Orleans would improve dramatically. Suddenly there would be many parents at all of the public schools who took a keen interest in education.

There are two great articles on the topic of Lusher. One is by local columnist Chris Rose, who discusses New Orleans' "culture of failure," and the other by professor Rodger Kamenetz.
Posted by Michael Homan at 7:53 PM 18 comments:

What I Did Today

I just joined Pax Christi. The world is a safer place already.
Posted by Michael Homan at 4:03 PM 2 comments:

So Pat Robertson has called for the assassination of Chavez? It reminds me of the time that Jesus said "We Jews have the ability to take Pilate out, and I think the time has come that we exercise that ability. We don't need another $200 shekel war to get rid of one, you know, strong-arm dictator like Pilate. It's a whole lot easier to have some of the covert zealots do the job and then get it over with."

A Later Note from September 9th Many angry people have written me correctly stating that Jesus did not say the above quotation. I know that. My point was that Pat Robertson was not in line with Jesus' teachings. That's all.
Posted by Michael Homan at 1:06 PM 5 comments:

According to The Onion, Bush has put forth an initiative that would have the US free from a dependency on oil imports by the year 4920. Sounds about right.
Posted by Michael Homan at 9:18 AM No comments:

I was suprised and sad to learn of the death of Peter Jennings this morning. I always felt he had a very balanced approach to the Middle East. He used to stay at the American Colony in East Jerusalem, very close to the Albright. His consistent coverage helped me deal with some difficult events that I lived through such as 9/11, the invasion of Iraq, and the last national election. One of my relatives, based on a false report by Rush Limbaugh, believes that Peter Jennings said after the attacks of 9/11 that the president should "quit hiding behind the Secret Service, come out and face the nation and explain the 'President's failure' to protect the country." Of course he never said that, and I'll miss watching the news with Peter Jennings. It seems that Brokaw is all that is left of the network news triumverate.
Posted by Michael Homan at 8:44 AM No comments: