Here is our latest family photo. It was taken Christmas Day at noon on the shores of Lake Ponchartrain: 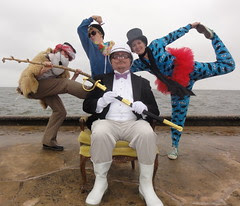 Posted by Michael Homan at 1:01 PM No comments:

Therese and I for the most part kept a vegan diet back in the 1990's. This was challenging in Omaha, a bit less so in San Diego and Jerusalem, but mostly it was challenging because I very much enjoy eating animal products. As a family we decided to try once again the vegan diet back in September. There are a few caveats though. We eat eggs from our own 8 chickens and we don't shun honey, though we rarely use it. It the most difficult for me during the holidays. Here's what we did for Thanksgiving: 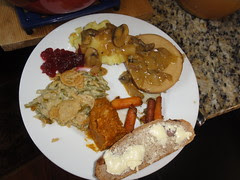 The tofurkey was good, but it certainly wasn't the same as a fried turkey or one smoked on the green egg as I've made in years past. Tonight for Christmas Eve I'm making pickled vegetables for an appetizer, potato artichoke soup for a starter, and then squash & pecan filled ravioli, brussels sprouts, with a buche de noel for dessert. Typically in years past I would make a meal centered around beef wellington. Mostly though I'll miss having oyster soup. It's been a part of the Homan Christmas Eve dinner for as long as I can remember.

So why are we doing this? It's complicated, but influenced by the movie Forks Over Knives, my current status as a fat man, and a belief that a vegan diet arguably makes the world a better place. I doubt it will last more than a year, but it's an experiment, now four months old. Enjoy it while you can cows.
Posted by Michael Homan at 9:14 AM No comments: