June 1st if the beginning of hurricane season, but it's also the day Therese and I got married back in 1991. Moreover, tomorrow we're celebrating the promotion and reception of tenure of my good friend Mark Gstohl. Come by to celebrate anytime after 5 PM. 215 S. Alexander Street. Kids are welcome, and we'll have Woody the oyster shucker/SUCKER, red beans and rice (it's Monday), crawfish Kalypso, plenty of beer, wine, booze, and assorted things that most of America would frown upon. The more fun we have, the less likely we are to flood. Any questions can be directed to my cell phone, 504 377 7284. See you soon.
Posted by Michael Homan at 4:34 PM 1 comment:

Sticking My Saints Neck Way Out There

Reports from the Saints training camp tell of a new attitude with the Saints defense under the leadership of Greg Williams. Like many Saints fans, I have been more than frustrated with the play of cornerback Jason David. He's currently listed on the second team, and he's broken so many hearts so many times giving up the big play that I couldn't believe he's still on the roster. But what if, and this is a big what if, but what if Jason David has a great year due to better pass rush and linebacker containment. With the return of their explosive offense and what seems to be the skeleton of a good defense, I've got a good feeling about 2009 at this early date. Hope springs eternal.
Posted by Michael Homan at 7:41 PM 1 comment:

Congratulations to Bart Everson, president of the Friends of Lafitte Corridor. I just heard that the Louisiana Legislator's budget has allocated $2.6 million for the trail. The goal is to be able to bike/walk from Armstrong Park to City Park along an abandoned rail line. My family and I will be marching in the 5th annual Hike of the Lafitte Corridor. Fee free to join us.
Here's a picture of the hike in 2006: 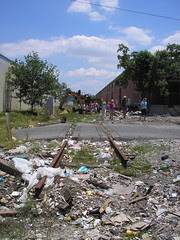 Posted by Michael Homan at 11:24 AM No comments:

I've noticed lately that the funerals I attend have changed. It used to be that friends of my parents were passing away. Such is the case with my Uncle Dick, who passed away last week. He was my dad's younger brother. That generation of Homan siblings has gone from four down to one. We are driving to Nebraska to attend his funeral on Monday. I have many fond memories of him, as his family had a cabin on the Platte River very close to our cabin. I mostly remember him laughing. He had a great laugh, and very kind eyes. But gradually these types of funerals have been replaced with funerals for friends and people my age. Such is the case with the wife of a Xavier colleague who passed away last week. She was one of the kindest people I know, and her passing after a long battle with cancer seems pointless. Next week Therese will be attending the funeral of a Lusher Middle School student, someone she used to teach just a few short years ago. That just makes me angry. At the age of 43, I am now entering the age at which people stop saying "He died way too young" and entering the realm of "He led a full life." Like King Gilgamesh realized 5,000 years before me, death sure sucks.
Posted by Michael Homan at 11:13 AM 1 comment:

Usually I'm cynical about such things, but how could this not be destiny? Six bars, six beers, six miles. I've been training my whole life for two of those three things. Therese has vowed to beat me. We shall see...

On Tuesdays and Thursdays in May, I report at 8:30 AM to Broad and Tulane where I check in to the jury pool at the Orleans Parish criminal court. I have never been asked to do jury service prior to this. Twice I have gone through the Voir Dire process, and last week I was chosen to sit on a jury during a criminal trial for a young man charged with possession of heroin and possession of a firearm by an ex-con. The trial lasted two days, and when we deliberated, I spent several hours convincing the other jurors that the accused was in fact guilty, and that the police were not setting him up. In the end we handed down a guilty verdict for the heroin charge, and the jury was one vote shy of a guilty verdict on the firearm, so in essence we were "hung."

I feel bad for the young man who will no doubt return to prison, a place where he has spent several years already. I am upset with him for putting me in the position to have to decide his fate. He has clearly made some poor choices. On the other hand, he has grown up in a world that is very foreign to me, a world where guns and drugs and violence are commonplace. I am also upset with the system. Juries are asked to make decisions without being privy to important factors in the case. I would have liked to have asked several questions to both the defense and prosecution. In the end it was like we were given a few glimpses into the events that transpired but we couldn't have access to everything. So I played a key role in sending another young African American man to prison in New Orleans, where we have more people locked up per capita than anywhere else in the world. I feel bad about that. I would feel worse perhaps if worked to free the defendant and then one day read about him hurting someone at a future date. That's a lot of speculation, I realize, and probably shouldn't be relevant. People can change.

I was happy to be excused from the jury yesterday. I believe I was excused as I stated I had previously served on a jury that did not reach a guilty verdict. Fine by me. I report again for the fourth time tomorrow, and then I'll be half-way finished.
Posted by Michael Homan at 12:02 PM No comments:

Why It's Important to Live in Retarded States Like Louisiana

I've been busy and mentally drained with jury service, but I wanted to bring up three recent decisions by legislatures in our state capital that have me upset but at the same time thankful that I live on the front lines of the battle for the soul of America.

First, the House passed a bill with the margin of 77-18 that the state of Louisiana will not issue birth certificates for adopted children born in Louisiana that list the names of two parents if they are unmarried. Read: screw you gay couples. Of course Governor Bobby Jindal supports this legislation. I was adopted, and this bill is mean spirited and will hurt children. It will hurt the kids later on when they need health care or admittance into hospitals and schools. Great job mean people.

Second, the House Committee on the Administration of Criminal Justice passed a bill that would allow concealed handguns on university campuses by those with permits. Again, great job reps. Jindal supports this also, of course. How about this, allow guns in the House, Senate, and Capital building in Baton Rouge. Of course you do what the NRA says, will you go this far?

Third, a Louisiana Senate Panel voted to outlaw the creation of mutant hybrids of humans and other animals, such as some of my heros including Ratboy, Molepeople, and the wee "help me, help me" dude in The Fly. So much for my mermaid fantasy.
Posted by Michael Homan at 5:09 PM 3 comments:

Happy Momma's Day to all the moms out there. Here at the Mishkan we took our mother Therese to see Star Trek on the imax screen. Pretty cool flick. Now we're cleaning and thinking about what to cook for dinner.
Posted by Michael Homan at 3:16 PM No comments:

We had a great time at Jazzfest. I was able to go with Kalypso and Gilgamesh on Friday and Sunday. On Sunday, a real highlight for me was seeing Neil Young. As you can see, it wasn't such a highlight for my kids. For much of the set Kalypso was sleeping and Gil was playing Pocket God with my iphone. 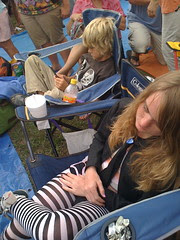 Anyway, in many years when Neil Young is dead, they'll claim they were interested. Maybe it was a result of all of the second hand marijuana, but while Neil Young was playing Old Man I started thinking he sure looked a lot like the Predator. Then during Keep On Rockin' in the Free World he looked more like a Wampa. But with his smirk, sideburns, rock-star-glasses and gray balding head I'm sure he's related to Jack Nicholson. Here's my best attempt at a family tree: 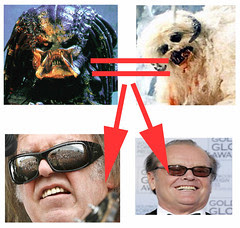 Yesterday, in honor of Jane Jacobs, there were walks in urban areas all over the country. Several took place in New Orleans. We joined one that went from the Odd Fellow's Cemetery to the Long Vue Gardens along the Metairie Ridge. We had a great time.
Posted by Michael Homan at 8:50 AM 1 comment: