I'm not a fan of 2019. It's for many reasons, but mostly because of death. The most difficult loss for me was my son Gilgamesh on September 17th. I also lost my sister Chris Homan on July 2nd, my biological brother Patric McKenzie on September 24, and finally, tomorrow, the final day of 2019, will be the funeral for my dear father-in-law John Francis Fitzpatrick who passed away the day after Christmas.
Posted by Michael Homan at 8:49 PM No comments: 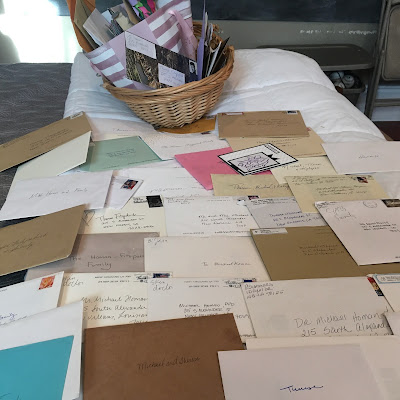 Others were from friends who had known Gil his entire life. They chronicled how they remembered our family as a strong unit of four. "The Homan Four" one old acquaintance wrote. The letters spoke of Gil's compassion, friendliness, confidence, and sense of humor. I'm glad we have these letters, and at a later date, I look forward to reading them again.
Posted by Michael Homan at 3:33 PM No comments:

19 years ago today, Gilgamesh was born in Jerusalem.
Posted by Michael Homan at 5:40 PM No comments:

Here are some of the posts from Facebook pertaining to Gilgamesh's accident:

Sept 16
Yesterday our son Gilgamesh Homan fell off his skateboard and fractured the back of his skull rendering him unconscious. At the hospital they put him on various life support mechanisms including a breathing machine. There was quite a bit of swelling and bleeding from the brain. They tried to take out part of his skull to ease the pressure. That didn't work. The neurosurgeons said there was nothing they could do.

Gilgamesh is an organ donor. Now over the next 30 hours they will try to find recipients for his organs. Probably Wednesday we'll say goodbye to him, and they will take him to surgery to take out his organs that matched recipients. He is just 18 years old. It's perversely senseless.

I'm not sure how appropriate messages like this are on facebook. It's just that there have been stories about his condition circulating and I wanted to clarify briefly what has happened. Thank you for your support during these difficult past 24 hours and for what lies ahead. I'm not going to be able to check facebook for a while so forgive me if I don't answer any questions in this feed.

Sept 17
The memorial celebration of my son Gilgamesh Homan’s life will likely be Saturday September 28th. More details to follow in a few days. We will be saying goodbye to him later this evening.

I began this blog way back in 2003 as a means to write about my teaching. My intentions were partly altruistic, as I thought that this might make me a better teacher and help others who teach and learn in the field of Hebrew Bible and the history and archaeology of the ancient Near East. Partly it was selfish, as in 2003 I was in my third year at Xavier University of Louisiana, and I planned on using this as part of my portfolio to show the Rank and Tenure committee that I should get tenure and promoted to the rank of Associate Professor. Looking back on how things played out, I would say that all of these goals played out more or less.

Then on August 29, 2005, my life like so many others were changed forever when Hurricane Katrina blew ashore and the levees in New Orleans turned out to suck. I wrote about escaping the flooded city, and then chronicled my family's efforts to recover. We battled the insurance industry. It took us three years to get into our house.  Here I journaled the challenging journey my family and I were on, and writing about our experience was cathartic. I continued posting until 2014.

But then I quit posting. I started feeling like the world would be a better place without so much of my voice, that it would be better for me to quit posting and to be quiet and do a better job listening. I started thinking that social media was ruining the world. All of the above might still be true, but now, with recent events, I think I'm going to need to start blogging again for selfish reasons.

My son Gilgamesh died. He was 18, and had just started his Freshman year at LSU. He had a skateboarding accident on September 15th, and he hit the back of his head hard on the ground. He was taken off life support and he passed away on September 17th. It's now two months later. These have been by far the two most difficult months of my life. Perhaps I'm being naive, but I think that if I write about this adventure of grief that it might help me on this stupid and awful journey. Time will tell. That's enough for now.

Posted by Michael Homan at 12:29 PM No comments: