I was feeling emotionally and spiritually drained after the Saints amazing come from behind victory over the Dolphins yesterday. This morning I asked God for a little help, a sign. And then seconds later I read that Saint Mary Magdalene's tibia is touring around the U.S. and Saturday it will be at St. Anthony of Padua's church, very close to my house. Mary Magdalene has been linked to prostitution over the past 2,000 years; however, this is more legendary than historical, as there is nothing in the Bible or early historical sources that mention this. But back to God's sign for me, even more amazing, St. Anthony of Padua is only a block away from the Canal Street Brothel where Senator David Vitter hired prostitutes. This is historical, but I should point out, there is nothing in the Bible that condemns diaper fetishes with prostitutes named Wendy.
Posted by Michael Homan at 9:59 AM 5 comments:

Satsumas are on sale, and we're playing the Dolphins today who wear orange on their jerseys. So I just made a satsuma witbier. This is the third batch I've made since I started homebrewing again on the 4th anniversary of the flood. The Katrina 4 year anniversary extra special bitter is great. My nut brown ale is bottled and almost ready to drink. And this satsuma beer should be ready for Thanksgiving if all goes well. 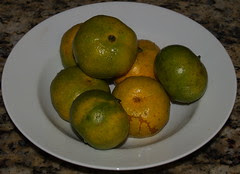 Gregory Broussard of Louisiana was sentenced to a year in prison, and then another year in a half-way house and home arrest, because in 2008 he told a social worker in an emergency room that he intended to kill former president George W. Bush. But what about all of the people who are threatening to assassinate Obama? A few examples I've read about in the past year:


Posted by Michael Homan at 9:21 AM No comments:

Dreaming of Werewolves and Alligators 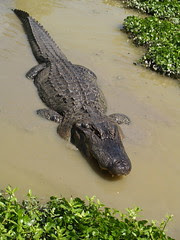 Four days ago I had the second scariest dream of my life. The scariest dream of my life came when I was about 6 years old. I dreamed I was in our backyard, and a werewolf came by and asked to see my siblings. I knew he wanted to eat all of us, so I lied, and then sprinted to the house. During this dream I was sleep running, as I came from my room in the basement to my parents' room upstairs, with the werewolf biting my leg as I dove onto my parents' bed.

The second scariest dream is as follows. I was near a small area of water where two giant alligators were eating birds at the opposite end of the swamp, about 30 feet away from me. It was muddy and though I tried not to I gradually slid into the water. I couldn't get out. It was too slippery, and I needed help. Therese was nearby but she was talking to someone. I said "Therese, please, I need some help here." When I said that, one of the alligators turned its head as it noticed me and started swimming towards me. Therese continued her conversation ignoring me. I repeated "Therese, I really really need some help, this is very very important." Therese kept on with her conversation. I noticed the alligator was about 15 feet away at this point. I raised my voice and said loudly that I needed help from Therese. The alligator at this point dove under water. I screamed "Therese, I really need some help here!" Just as Therese was saying goodbye and noticing me in the water the alligator bit my leg.
Posted by Michael Homan at 9:13 PM 4 comments:

Jess Zimmerman, a junior at Butler University, is being sued by his school's administration for "libelous and defamatory statements" made about Butler's administration in a blog entitled "TrueBU Blog." The blog was removed earlier this year by Zimmerman. Butler's administration seem to suggest that the alleged crime here is that he was publishing his opinion pieces anonymously as "Soodo Nym." Zimmerman has chronicled his story at "I Am John Doe."

As a non-anonymous blogger who at times questions decisions made by my university, I'm terrified that this sort of thing is happening. Due I suspect to the negative publicity this has generated for Butler, the president of Butler has recently said that they will not sue Jess Zimmerman, but the lawsuit has not been dropped.
Posted by Michael Homan at 9:33 AM 6 comments:

Do Vitter and Melancon Let Black People Use Their Bathrooms?

Louisiana politicians, for good reason, have been rushing to call for the ousting of Louisiana justice of the peace Keith Bardwell in Tangipahoa Parish. Bardwell made national headlines by refusing to marry a white woman to a black man earlier this month because he believes that most interracial marriages end in divorce. The best part is when he stated "I'm not a racist. I just don't believe in mixing the races that way, I have piles and piles of black friends. They come to my home, I marry them, they use my bathroom. I treat them just like everyone else." The justice of the peace in question, is a Republican, so of course state democrats have loudly called for his termination. But here Republican leaders as well have voiced their opposition, including Governor Bobby Jindal.

Why then has David Vitter said nothing? Could it be that he would purposely remain silent in hopes of a large racist turnout come election day in 2010? But then again come to think of it, his Democratic challenger Charlie Melancon has said nothing also.
Posted by Michael Homan at 12:55 PM 2 comments:

Why Larry Csonka Will Cry On February 7th

I didn't want to say anything, being the humble guy that I am, until the Saints dominated all three teams from the New York/New Jersey area. But after yesterday's 48-27 pounding over the Giants, I'm pretty sure now that the Saints are going to go undefeated this season. What will be especially sweet about this feat will be that the Super Bowl is in Miami, so if any of the 1972 Dolphins are still alive, they won't be able to have their annual champagne toast when the last undefeated team gets beat. Stay healthy old timers. And get comfortable in Miami this weekend Saints players. You'll be back down there in a few months. Who dat?
Posted by Michael Homan at 10:27 AM 1 comment:

President Obama will be arriving in New Orleans in a couple of hours. He's scheduled to visit a charter school in the 9th ward, and then have a town-hall meeting at the University of New Orleans. Many are complaining that he'll be here just over three hours, or that he won't be visiting Mississippi or other areas hit hard along the gulf coast, or he won't bring enough of a spotlight to coastal erosion. Personally, I'm thankful he'll be here, and I am especially happy that Leah Chase is going to make sure he eats well. According to the Times-Picayune: "Because of the hurried nature of the trip no meals were built into his schedule.
Worried about this, and knowing "how skinny" the president is to start with, Chase let it be known that she would love to put together a to-go order for him." Chase stated: "I know he likes gumbo, so there will be gumbo; I know he likes shrimp Creole so there will be shrimp Creole; I know he likes fried chicken, so there will be chicken."

About a year ago I had the privilege of hearing Leah Chase speak at Xavier. I can't think of anyone better suited to prepare a meal for the president. Her cooking is the opposite of fast food, and embodies so much of what I love about New Orleans. Here's a plate she made for me one day not too long ago: 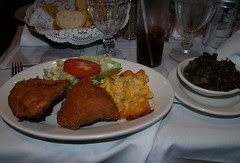 Coach Sean Payton says not to, but I can't help it. I plan on eating plenty of cheese between now and Sunday when the Saints return to the Superdome to beat the Jets and go 4-0 into their bye week.

However, eating the cheese may not be the best prescription for every Saints fan, including Howie, as Reggie Bush astutely observed "if you eat too much cheese you may get sick ... especially if you're lactose intolerant.'' Because Howie will be sitting next to me in section 327 row 13 seat 11 on Sunday, and because at times he claims to be lactose intolerant, I'm hoping he keeps his cheese eating in check.
Posted by Michael Homan at 11:50 AM 5 comments: