If you are interested in learning more about what's going on at Marj Rabba, where my two Xavier students Alexis Parker and Melissa Nguyen are excavating along with Gilgamesh and me, check out these resources for updates:

Marj Rabba is part of the Galilee Prehistory Project. They're blog is here:
http://galileeprehistoryproject.org/

We just finished week two at Marj Rabba. Interesting site, great people. I've been enjoying learning more about the many mysteries of the Chalcolithic period. We work Sunday through Friday with Saturdays off, though we seem to tour something on either Friday or Saturday. Last weekend we toured the excavation at Akko. Today we took a trip to the  Golan Heights to visit Rujm el-Hiri. I had never been here before, and I have to admit that even with a map, it would have been very challenging to locate. Thanks to Chad Hill for navigating us there.

Rujm el-Hiri is an amazing site where giant basalt boulders are placed in circles, all around a central rock quern burial. Some people call it the Stonehenge of the Chalcolithic because the sunrise on the solstices seems to match the orientation of the structure. Here is a picture of the circles from an elevated position from Wikimedia: 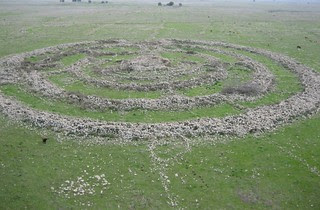 A whole lot of people moved a whole lot of rock to make these designs. It very much reminds me of Poverty Point in Louisiana. Lots of questions are raised about the purpose of both Poverty Point and Rujm el-Hiri. There seems to be a debate about whether this was built in the Chalcolithic period or later. There do seem to be several Chalcolithic settlements in the area. It's always hard to date structures such as these. There were burials in the giant central rock quern, but they were robbed long ago. In any event, it's an amazing site. 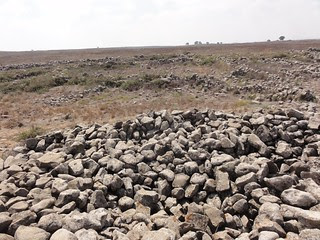 Posted by Michael Homan at 8:50 AM No comments:

How Gilgamesh Tried to Kill Me at Ein Gedi

I learned some valuable lessons yesterday. We rented a car and drove from Jerusalem to Ein Gedi. As we'll be working at Marj Rabba soon, I wanted my students to learn more about the Chalcolithic period. So our goal was to hike to the famous Chalcolithic temple above Ein Gedi, and talk about Ghassulian material culture, objects such as cornets and the ritual objects from Nahal Mishmar. So we walked in the Nahal David, and then started climbing. The first lesson I learned was that I am older and far more out of shape then I was the last time I did this. The second lesson I learned was that my Birkenstock sandals were not the best choice of shoes for this trek. But the most important lesson came about 30 minutes into the walk. Gilgamesh, carrying our shared backpack, decided without asking that he'd race ahead. Ein Gedi is on the shores of the Dead Sea, which is the lowest place on earth. Because the water evaporates, the place is always very humid, and it's very hot in the summer. It was 41 degrees celcius yesterday, or about 105 fahrenheit. Every time I thought we'd reach the apex, the trail would turn and there would be 100 more steps. I was getting exhausted, but more dangerous, I was getting seriously dehydrated. Also, my students didn't pack enough water for themselves and one student, Alexis, was starting to get a headache, a bad sign of dehydration. Gilgamesh had our large water bottle in the backpack, and that would have been enough for all of us to stay adequately hydrated. I quit sweating, was getting a bad headache, but slowly with much resting we marched up and onward. Finally we came to the Chalcolithic temple. Then suddenly, there was Gilgamesh. He said he had gotten lost. I said to him, with a very dry mouth and breathing heavily, "Gilgamesh, can you think of anything in that bag that I would need to survive out here?" He gave me the water bottle, but it was empty, as he had drunk all of the water. So Gilgamesh agreed to go back down to the visitors center, get the water bottle filled, and then meet us as we were descending. We took some photographs of the temple. But we were too tired to walk up a bit higher to get a better perspective. Here's the temple in a panorama shot:

Eventually we made it back down, found Gilgamesh, and then sat for an hour in the shade drinking liter after liter of water. It all turned out OK in the end, thankfully.

The company that profits from red light cameras in Baton Rouge released a study claiming that yes, the red light cameras saved many lives over the past five years. In other shocking news, advocates for Charter Schools claim massive success in education reform for the New Orleans area.

When I travel I get this a lot. People from all over the world have heard that charter schools saved New Orleans' once dismal public education system. I found out yesterday that my wife, a teacher in a charter school in New Orleans, received a merit raise of $1.50 for next year. That's because she reached her school's goal of 80% student achievement on a certain standardized test, or something else, I didn't fully understand. We were re-watching Game of Thrones episodes and that was more interesting than taking the time to comprehend what goal she reached to get the $1.50. But the point is, as far as I am able to speculate, that the governor of Louisiana and all of the other "treat education like a business" people will now be able to accurately claim that they paid high performing teachers more as an incentive for their good work.

We haven't decided yet how Therese will spend that $1.50. Maybe she'll splurge on an ice cream cone, but those likely cost twice her raise. She spends quite a bit, as do all of the teachers I know, on classroom supplies. Maybe she'll get a few pencils and an extra eraser.
Posted by Michael Homan at 11:37 AM 6 comments: