People who we've met who have experienced the death of a child all told us that the annual anniversaries of the tragedy are difficult, and after going through our first anniversary of Gilgamesh's accident and death back in the middle of last September, I can say this accurately reflected our experience. Anticipating this, we drove 7 hours away to Cheaha State Park in northern Alabama. I'm glad all three of us got away and spent it together. I'm glad our dog Enkidu was able to join us. Here we are: 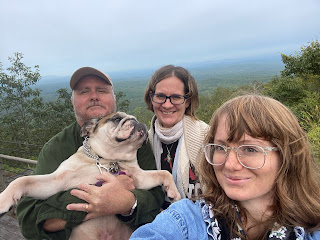 My Jewish friends and colleagues remind me of their tradition where there is a year long mourning period before the process of working on grief begins.

Posted by Michael Homan at 12:14 PM No comments:

Therese's birthday was last weekend. There were fun parts about it, like Xy's pool, and the chocolate mousse that Kalypso and I made was great, but mostly it was sad because of Gil being gone. It was Therese's first birthday without a Gil hug in many years. Some of Gil's friends it seems were on social media letting each other know it was Therese's birthday, so she heard from many of them. She really loves hearing from them and cherishes these things, but it is hard at the same time.

Posted by Michael Homan at 10:32 PM No comments:

Therese, Kalypso, and I went to vote today. We were sad to see Gilgamesh's name on the voting registration, immediately preceding Kalypso and me. They gave me an LR-34(79) form, also known as "State of Louisiana Application for Cancellation of Deceased Registrant by Relative" application. Gilgamesh only voted once. We went to the Lake Vista Community Center to vote early, probably on November 24, 2018, just three days after his 18th birthday. At that time, Therese was in Omaha for Thanksgiving and Kalypso was at work, so it was just Gil and me. With Gil being Gil, who was always hungry, I remembered we stopped at Birds Nest Cafe so he could get some food. I remember he was interested in studying the candidates and the issues on the ballot. He would have been a good citizen.
Posted by Michael Homan at 9:54 AM No comments:

Yesterday was Father's Day. Happy Father's Day to all the fathers. My father William Homan passed away in 2007. His birthday was June 21st, so I always saved money by giving him one gift for both events. This was my first Father's Day since my son Gil died. Sadly, there used to be two people in the world who called me "Abu," and now there is only one.
Posted by Michael Homan at 9:24 AM No comments:

I rarely remember my dreams. But when I awoke this morning I was in the middle of a very strange one. I was in the desert riding a camel, and it was not a very good camel. I was doing some sort of archaeological survey, but the camel was unpredictable and dangerous. I exchanged it for a much larger camel, and I was impressed with how it handled. I was nervous it was going to throw me as I tried to get on its back, to get my left foot over it, but it waited for me to get situated. Then I'm at my mom's house in Omaha, and now I have a large horse. I bring it downstairs to where my room used to be. I have a feeling like I've left the horse there a couple of days and I've been neglecting it. I knew Therese was going to be upset with me. I can't tell if the water on the floor is from Therese mopping or from the horse urinating. Then the horse gets on the couch with me and it's on its side, and Enkidu my bulldog is licking the horse's ears and the horse thinks it's funny, but I'm worried its legs will crush me. So I get up with the intention of taking the horse to the back yard for food and water, and I'm wondering what horses eat, and then I worry it will eat my mom's garden. I see the shower is on and I assume Therese must be in it as I see her blue and green robe. I know she's going to be upset so I start thinking about what to wear from the clothes in my suitcase. Then Gilgamesh comes down the stairs. I'm only wearing my black underwear, and Gil is wearing the same. He is also wearing his Buddy Holly glasses, and is about 14 years old. He thinks it funny we are dressed the same and he puts his hand in the air, pointing up, and shakes his head up and down saying "Yeeeeaaaaahhhh." I wasn't surprised to see Gil, like he was missing or anything. Then I woke up.
Posted by Michael Homan at 10:27 AM No comments: 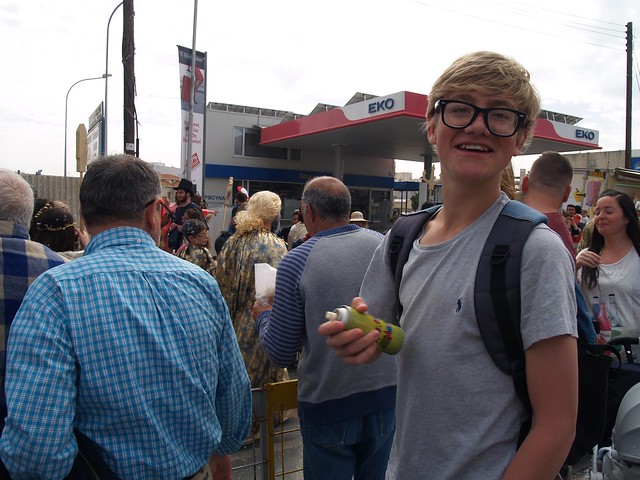 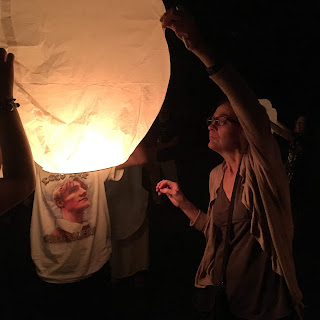