I have a pretty impressive collection of Bible action figures. But yesterday I discovered on the floor under my desk one of my Moses figures. He had a rough night. 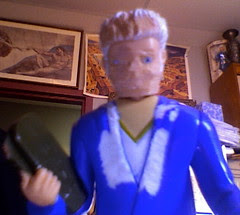 It seems a mouse gnawed off his face, chewed on his robe, and even started chewing on the upper corner of the second tablet of the Ten Commandments. The mouse came close to wiping out the sixth commandment, which forbids murder. But the prohibition against murder still stands, even here in New Orleans, the murder capital of the U.S. Perhaps the mouse was trying to enforce the second commandment, which prohibits making idols, such as Moses figurines. But I'm not so worried. Luckily I have a second one still in the box. 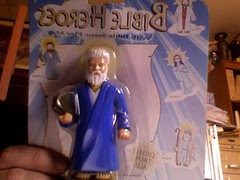 Posted by Michael Homan at 8:34 AM

What are these things made of? Cheese?? That mouse really went to town on poor Moses.

Thanks for the chuckle -- both of the picture comparisons, and of the thought of you with a full collection of "Bible Hero" action figures.

Or maybe my ninja hamster is keeping them away.