Earlier this month, an evil mouse ate the face off of my Moses action figure. Sadly, the mouse's killing spree has continued. This is a model of a Bedouin tent that I got in Jordan back in the late 90's. 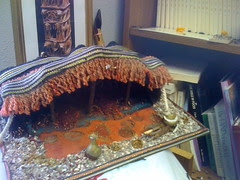 It used to have a nice Bedouin couple living in it. They were happy, sitting there in the tent, perpetually drinking their tea. Now they're gone without a trace. There are mouse teeth marks everywhere, and I think I've found the Bedouin man's moustache and kafilla mixed in with mouse feces on the floor. I was fond of that tent and the Bedouin family. I did my dissertation on ancient tents, and then published a revised version with Brill Academic under the long title: To Your Tents, O Israel!: The Terminology, Function, Form, and Symbolism of Tents in the Hebrew Bible and the Ancient Near East. It's not written for a general audience, though it got good reviews. It's currently listed as #3,179,731 in the Amazon.com sales rank. As part of the research I spent a great deal of time with real Bedouin in the south of Jordan, and this tent was a kitchy way for me to remember those times. The mouse is also chewing on my books.

So now my main goal in life is to bring this murderous mouse to judgement. You can see in the above picture that on the shelf in the background (upper right) that I have two types of mouse traps, the old fashioned kind with a tasty cheese bait, and then the new sticky surface kind, with some more cheese in the middle. I'm hoping he chooses the sticky surface kind, and then I will enjoy taunting him with my many other Bible and ancient Near East action figures who survived his killing spree. It is on, mouse!
Posted by Michael Homan at 12:50 PM

Mice can be trap shy (so I hear from a biologist I love), so you may want to consider plain old poison.

He prayeth best who loveth best all things both great and small...

Having gotten that out of the way.

Mice like to go where other mice have been. Collect some mouse feces and but them on the snap trap and inside the sticky trap. Wash your hands very thoroughly afterwards.

Sticky traps. Definitely sticky traps. With a little nibble incentive in there (or the feces) as a lure.

In spite of all the old cartoons, mice don't really like cheese. They prefer peanut butter. Since peanut butter is sticky it is also harder to steal from a trap.

It sounds like your mouse just got her Road Home check and is collecting building materials for her nest. You'll probably have some babies to take care of soon.

sticky traps work great but it's always a bitch to deal with that squriming live mouse on the trap. i dont have the heart to just throw him in the trash and say "fah-ged-aboud-it".

i allways have to take the glue trap out to the driveway and give the mouse an instant death headblow on the cement. it sucked when the traps caught one on christmas eve and i had to dispatch the old boy in a humane and quick way only to go back in the house and try to watch "christmas story".

i used to prefer the walfren type poisons that the mice eat and than go outside looking for water because their guts are bleeding.

since katrina i feel like the govt taking the easy way out using the bait. i feel like if im gonna kill these guys i need to take ownership of it and the karma that comes with it.

plus the collateral damage of one of the neighborhood cats eating one of the poisoned mice.


i eat meat and drive a gasoline powered vehicle and yet i feel bad about killing a rodent that comes into my house and tries to eat my food and leave poo in it's place. weird.

thanks for the post. if a theolegy prof. can justify killing rodents it gives me something to think about.

Mike, this is a dark dark aspect of your otherwise kindly Theology professor demeanor (excuse me, I seem to need to cough for a moment...)

Do you realize that by killing the mice you're acting as an agent of natural selection and thus reifying Darwin and all things evolutionary??? Is that permitted in the deep south??

Sue, who is this Darwin? He sounds interesting.

Depending on the size of the mouse, you can flush him after you kill him. Dr. Porter in Biology can show you how to kill a mouse in seconds just by stopping his heart by holding it with your thumb.

This is the wittiest story I've ever read about a mouse incident!

Once upon a time, I could not bring myself to kill mice. Then...post-Katrina, I held out until one jumped out of the sleeve of my sweat shirt. I then went on a murder spree: 10 traps from Harry's Ace Hardware, all baited with peanut butter. 8 snapped within hours, and I saw no more evidence of mice for about six months.

A worst-case, glue-trap scenario: you might find only a mouse leg on there!