To My Neighbors Upstream

The upper Mississippi River and many of its tributaries are flooding, having already overtopped six levees in Iowa and Missouri. There is also flooding in Wisconsin, Indiana, and Illinois. Now the feds report that as many as 27 levees might fail in the next few days. I have many fond memories of summers spent in Des Moines, Cedar Rapids, and Iowa City, and I am sorry the people there are about to share my experience with the difficult task of rebuilding your life after a flood. And like Xavier three years ago, the University of Iowa has flooded and has now suspended all university operations. Five people are dead, and there is no drinking water in many areas. On the news last night I saw people yelling at government officials and police because of road blocks preventing people from seeing their homes. That brought back many bad memories, times when I snuck back into New Orleans and the time I first saw my house after the flood waters had rescinded. Rebuilding your life after a major flood is an all consuming task. It is taking us three years. I pray that the people involved in this most recent flood are treated fair by their insurers, and that those without insurance can be given a helping hand by the government to begin their lives again.

I'd encourage you to join me in contributing to the Red Cross Disaster Relief Fund. 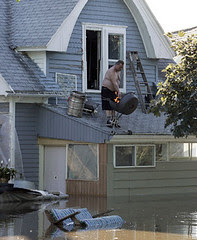 Flooded Home in Cedar Rapids, (Frank Polich/Reuters)
Posted by Michael Homan at 7:43 AM