Scott McClellan's memoire has renewed quite a ruckus about this "presidential" pic: 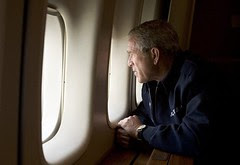 Two days after Katrina, as New Orleans drowned following failed federal levees, the president flew above the Big Easy and looked out his window, and he said "It must be twice as bad on the ground." Well, as someone who was on the ground, it was actually much worse Mr President. The picture, according to McClellan, came to symbolize Bush's detached response to this disaster. Bush supporters claim that if Bush would have personally visited New Orleans it would have impeded rescue efforts. They say that with a straight face. Only 229 days left of this administration.

But given the fact that McCain is the Republican nominee for president, could someone tell me why does the White House still have this picture on its website? 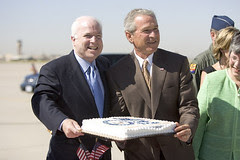 Here John McCain celebrates his 69th birthday in Phoenix by presenting a cake to George W. Bush. The Whitehouse website then states that "The President later spoke about Medicare to 400 guests at the Pueblo El Mirage RV Resort and Country Club in nearby El Mirage." Well, all this took place on Monday, August 29th, 2005. At that same moment, I was happy to have survived Katrina's winds, but was curious why the water kept rising. I'm sure that McCain and W wanted to come to New Orleans but realized that the presence of their persons and birthday cake would have impeded rescue efforts.

McCain has been using New Orleans a lot lately. Last night when the primaries closed McCain said he was speaking from New Orleans, but in reality it was from Kenner. He also recently came to my university and used us as a prop. However McCain's voting record has been anything but friendly to New Orleans and our efforts to recover after Katrina. I'm tired of being used, and prefer detachment and apathy, even if it means some of us wade through water to limit drownings while our political leaders eat birthday cake 1500 miles away to cope with "disaster fatigue."
Posted by Michael Homan at 3:04 PM

Egyptian archaeologist Zahi Hawass announced that his team has unearthed the pyramid of King Menhoukar, 2300 BCE.

I'm tired of their sht too Michael. I remember where I was that day. Nothing makes me madder than hypocrisy, and the repubikkkans pretty much have it down.