When we first moved to New Orleans, we had a very difficult time getting our driver licenses. In fact, it took us more than one day. Previously we lived in California, where we made an appointment with the DMV online and this simple task took only took 15 minutes. Here of course the DMV had no website, they don't answer their phones, and we had to wait all day for our number to be called only to learn we didn't have the correct documents. Later, people were shocked to learn that we went to the New Orleans DMV, and they said that they always go to Metairie or Slidell even though it costs more. A friend of Therese stated: "Darlin, you're no longer in the United States, you're in a Banana Republic."

That stuck with us. I always thought that living in Falafel Republics, small and impoverished areas in the Middle East, helped us acclimate to living here. In Amman and East Jerusalem we were used to waiting in line all day for visa extensions, and we always expected the worst and we were rarely disappointed. Whenever dealings with the local government transpired without a glitch, we'd light a candle in a church and tell everyone about it. But recently during a conversation a wise woman told me that New Orleans is not in fact a banana republic. She said to look at buildings like the courthouse, which you see here: 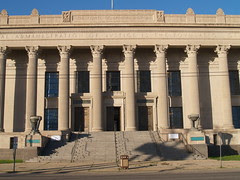 She claimed that New Orleans was more like cities in Eastern Block countries such as Hungary or Poland, which had amazing infrastructure and architecture in the past but now the cities were crumbling and decaying because of inept government. I've thought a lot about this, and about how Big Oil left New Orleans in the 80's, and wonder if New Orleans has what it would take to wipe out corruption, fix public schools, and attract businesses again. I'm not very confident. It certainly won't happen under the reigns of Ray "Fishy Crime Cameras" Nagin or Bobby "School Vouchers for Not Vetoing Pay Raises" Jindal.

But wait... Who's that Yankee on the horizon sniffing out corruption as the first ever inspector general of New Orleans? I heard that after one year, he finally has telephones in his office. In another year he might even have the computers and the staff he's been promised. Look out world, New Orleans is coming back! But then again, we don't live here for the DMV, we live here for the bananas foster at Brennan's and the falafel at Mona's.
Posted by Michael Homan at 9:46 AM

Why should anybody believe that this guy, Ceracoli (sp) is anything more than "window-dressing"? You know, lets pretend that we're interested in rooting out corruption.

Don't say that to Sandy Gavin! Last time I saw him he pursuing the slime bags with all due haste.

But +1 to most of what Michael said about trying to get things done in town. It was quite a shock coming back to Indy a Now Place where everybody is thankyouthankyouthankyou, and if you have to wait one second you get apologies. I have gradually gotten used it now.

Hi Mike
Love your blog. Read your story of surviving Katrina - I wonder if we saw you on TV during that time - sitting on your balcony with your dogs.
We have had the good fortune to meet a gentleman from New Orleans who now lives in San Antonio. He too was evacuated by Jesse Jackson (for those who do not believe he was really there!) His story was far different than the media reports.
Saw on your website that you and students continue to help rebuild. Good for you!
Anyway - keep up the good work.
Stephanie
www.eagleswingspublications.com