Dangerblond had a 1960's birthday party last Saturday night. That's her on the right: 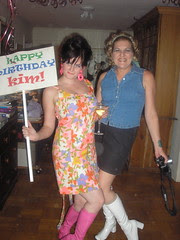 Being that I grew up in the 1970's, and got sick of hearing people from the 1960's say "We thought we could change the world man!" I became a punk rocker. So to rebel against all the free love hippie baloney, I dressed up as a sensible God-fearing Christian with no tolerance for today's youth. There was one other distinguished like-minded gentleman at the party. We talked at length about how the country is going to hell because of that crazy Rock N' Roll music, as well as why we both thought Pat Nixon was sexy in a retro kind of way. 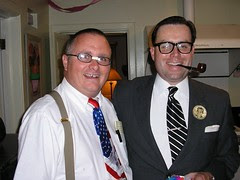 Thanks to Adrastos for the second picture.
As part of my costume, I had a list called "Why God Hates Hippies!"
1. Pinko Commie Bastards.
2. They hate Jesus.
3. The 10 Commandments.
4. They hate America.
5. Free love sluts.
6. Smell like spoiled milk.
7. Loud rock n' roll Music.
8. Draft dodging cowards.
9. They smoke marijuana.
10. They take freedom for granted.
Posted by Michael Homan at 8:36 AM

Hippies also have lice and eat way too much because they always have the munchies, man.

I don't want to get hate e-mail for saying this, but I think Pat Nixon was prettier than Jackie Kennedy. After all, she was a blond.

The tooth really makes it, Michael. Did you feel dirty when this was over? Sometimes it's hard even to pretend such things.