My son Gilgamesh is in kindergarten. Every now and then he brings home this cute stuffed rabbit named "Huggabunny" to spend the night. Huggabunny has this big scrapbook that goes with him full of nice and happy pictures and words. The deal is that the lucky families take pictures of Huggabunny and document how much fun they've had with his happy hippity-hoppity self. But in looking through this scrapbook there was absolutely no reference to biggest elephant to ever hit the United States: Katrina. It dominates every hour of every day in New Orleans and somebody needed to let Huggabunny know about this tragedy. So I spent some time this weekend bringing Huggabunny up to date with the real New Orleans post-Katrina. 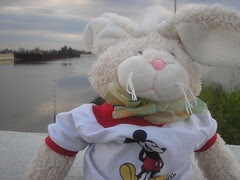 I took Huggabunny to the 17th street canal breach, where the Army Corps of Engineers poorly designed these levees. You can see the repairs over his right shoulder. I explained to Huggabunny how these design errors cost more than 1,000 lives and the destruction of many more homes and families. Huggabunny said "Poorly designed levees make Huggabunny sad." Me too Huggabunny. 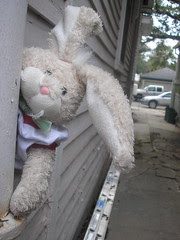 I showed Huggabunny how our home flooded, and how it was leaning from the winds of Katrina. Huggabunny tried with all his might to push our house back into place. It didn't budge. Huggabunny said "Huggabunny happy because at least the Homans had flood and wind insurance." I told Huggabunny that I wanted to show him some files. 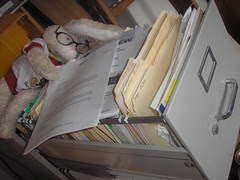 I showed Huggabunny the report we received from Allstate in April, saying they were denying the structural damage claim because of a report by Haag Engineering. Huggabunny couldn't understand why the report called the damaged home the "Wilson house," and why it had pictures that didn't belong to the Homan house. Huggabunny giggled when he read the part that said it wasn't windy enough during Hurricane Katrina to make a house lean. "Silly Allstate" he laughed. I showed Huggabunny more files, like the one that has our lawsuit against Allstate, and the Road Home file. Huggabunny said "Huggabunny tired." We're tired too Huggabunny. 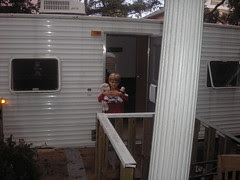 And so Huggabunny, thanks for coming by this weekend. I hope you enjoyed your FEMA trailer experience. They're actually pretty spacious for someone your size. Be sure to let people know that New Orleans and the Gulf Coast still need a lot of attention. Come back and see us anytime Huggabunny.
Posted by Michael Homan at 9:59 AM

I guess Huggabunny went home a little older and wiser from the time spent with the Homan Family.

When Mark, Gilgamesh's old pre-school pal, was in kindergarten, he brought home Snopp. Snopp came home two years ago, so he didn't need a reality check. We just gave him a good brushing and read him a story.

Let me know if you need a good recipe for Huggabunny Jambalaya.

I loved Huggabunny's work in "Monty Python and the Holy Grail." Maybe you should introduce him to your Allstate rep.

Hi. I'm the boyfriend of Miranda Bradford. I would like to say that this is a beautiful employment of commentary about the situation. Thanks for freeing Huggabunny from his blissful ignorance.