The Saints are 2-0, and last night I saw perhaps the most inspiring of all sporting events: The Big Easy Rollergirls. 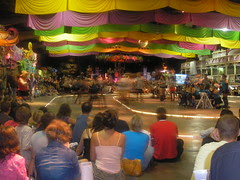 My favorite player was a buxom girl named Cheap Thr!ll, and her number was 40oz. I fortunately bought my tickets online before the bout, because many people, including Howie, were turned away at the door because it sold out. Also on Saturday, Gilgamesh had his first soccer game of the season, and Kalypso had her first cross country meet. It was a pretty good weekend, only slightly marred by rogue FEMA contractors errantly installing sewage pipes. The guy supervising the installation of our FEMA trailer (there seem to be about 10 people involved in this project) ordered that the sewage pipes be put on the north side of our house. However, I came home from work on Friday and the pipes were on the south side blocking the path to the back of our house. These guys work fast, and they're in and out before I can catch them. It's especially hard to oversee all of this when both Therese and I have day jobs. But through some massive investigative work, I was able to get someone to agree to come out to our house on Monday to see about moving the sewer pipes to the side of the house where they belong, as it's much closer and better suited for the necessary decline. Sewage pipes need a very slight decline. If it is too steep, the water rushes down leaving the toilet paper and other "stuff." That's just one of the millions of things that I've learned thanks to Katrina and the faulty levees.
Posted by Michael Homan at 4:40 PM