After the Flood All the Colors Came Out

Yesterday was truly a beautiful day. It's Fall, and the weather was crisp and perfect. In class my students and I discussed my favorite story, the Epic of Gilgamesh. Then I biked to downtown where I heard Cowboy Mouth. There I met my friend Mark who had lost his job at Xavier after Katrina. He had just learned that Xavier is rehiring him to the faculty. So my favorite colleague is coming back, which alone would have made the day one of the best. Then the Superdome reopened, Mark and I went inside, stood in long lines for beer and andouille sausages, and watched Green Day and U2 perform. Then Irma Thomas and Allen Toussaint sang the most beautiful rendition of the national anthem that I've ever heard. The Superdome was incredibly loud, filled with people who desperately needed something for which to cheer. Ninety seconds into the game, the Saints blocked a punt and recovered it in the endzone. At that moment, the Superdome was full of so much energy, it was like nothing that I've ever experienced. Then the Saints did something I have never seen them do: they played 4 quarters of mistake free football, and they beat the favored Falcons on Monday Night Football by a score of 23-3. Biking home at midnight smiling strangers I met wanted to talk about the game. Others just shouted "Three and O, Baby!" I'm so thankful to have experienced such a great day. 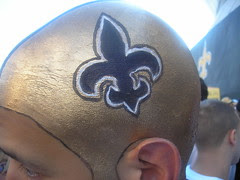 Posted by Michael Homan at 1:26 PM

It's great to hear that we're starting to rehire, that Xavier is calling back the people that worked there before. This is very heartening.

You lucky bastard! That's great. I sent you an email about going to the Tulane game.

I'd seen on Howie's site that he's coming back, and I'm thrilled. I'm glad for him, for you, your department, and the university (and myself).

That game was amazing. I talked to B about it and know it's not as big for everyone, but what I've told my brother and other casual observers is significant I think: We actually look like a professional team this year.

I read a comment on one column suggesting a conspiracy for Atlanta to throw the game, and we did get some pretty conspicuous (but not suspicious, in my view) breaks along the way. But if anyone suggests such a thing to me personally, I would just ask if we were in on a conspiracy all those times we threw away a game in the 4th quarter, threw the ball backwards or right to a defender, botched a game-tying extra point, and on and on.

I'm glad you're at the games this year; I'm eager to hook up with you guys for a beer beforehand when it's not Mardi Gras outside the Dome! Cheers.

Trolling around for the lyrics to "The Saints are Coming," I stumbled on your web page. You're GIL's dad! Gil and my son Mark were at Bolden together for a year. Is he in first or 2nd grade now?

Welcome to my bookmarks...

Gilgamesh is in Kindergarten now.

Soccer Live Matches At Your Desktop
There are thousands of High Quality Channels streaming live football from around the world. We are here to show you how to

matches are as per BST.

Special Introductory offer:
Live match links in your mail account at only £1.00 GBP. Free for First Day if you subscribe it now.

1. Free Software:
We will provide you all software you need to get live match at your desktop.

3. What's Needed:
Just need is to click on the link, start the software and match is on your desktop.

3. Live Soccer:
Watch live soccer online on your PC no need of buying Sky or Cable?

4. Is It Legal?
We donot stream live football from this server or blog. There are thousands of High Quality Channels streaming live football

from around the world. We are here to show you how to find them.

Check it Once
Soccer Live Matches At Your Desktop