Today I received a certified letter from the Louisiana Department of Public Safety and Corrections. It states that they found our '94 Toyota Tercel on a public right of way and towed it. It's being stored at an impound lot on Almonaster Ave. I have 10 days to claim the vehicle, or I can have them dispose of it for $15. Here's a picture of the car on the last day that I saw it: 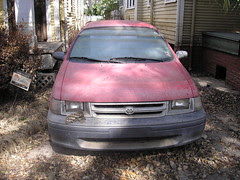 The car was completely submerged by the flood waters, and it disappeared at some point between October-December 2005 when we were in Nebraska. We of course assumed that it was removed by one of the companies hired to pick up flooded cars. So it seems unfair to me that I should have to pay the $15. Instead, I'm sending the Department of Public Safety and Corrections a letter asking them to charge the $15 bill to the Army Corps of Engineers.
Posted by Michael Homan at 5:05 PM