Yesterday I went with Kalypso and Gilgamesh to the National World War II Museum. It was very well curated and overall it was a good pedagogical experience. One reason that the museum is located in New Orleans is because this is the home of Andrew Higgins, who like me was born in Nebraska, and he built his famous boats not too far from where we live now. 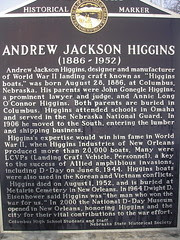 The highlight of the tour was Beyond All Boundaries, a film they advertised to be in 4-D. The 4th dimension it turns out involves vibrating seat cushions. Towards the end of the film they represented one of the most significant moments in human history, the dropping of the two nuclear bombs in Hiroshima and Nagasaki. This was portrayed with an initial bright light, seat cushions vibrating, and then falling fake snow painted gray to represent ashes. The film in my opinion downplayed the controversy surrounding the decision to bomb these civilian centers. We were told the bombs were dropped to save lives, as in previous behavior from Japanese soldiers and civilians clearly indicated that they would never surrender, and the required ground invasion would have killed millions more, both U.S. soldiers and Japanese civilians. It got me thinking about how all of the world's great museums chronicle and even at times celebrate war. To get over my depression about the potential for humans to act cruel I've been watching Bruno. This reminds me that people are also very funny.
Posted by Michael Homan at 10:59 AM

The use of the first atomic bombs remains a controversial decision among historians.

I have studied the decision and am satisfied that Truman acted out acted out of an honest conviction that it was the right thing to do.

No one can ask more of a leader.

I am convinced. My father was supposed to be redeployed to the Pacific after flying combat missions with the Eighth Air Force in Europe.

The museum near Hiroshima, Japan doesn't even mention Pearl Harbor. There's like a timeline of events on the walls and they just completely skip over that part!