The biggest game in the history of the New Orleans Saints will take place this Sunday at the Superdome, and earlier I invited my friend Howie Luvzus to join me. But now I have second thoughts due to some horrifying plans that Howie devised for after the game. First some background information is necessary.
Before big games a few of us visit the grave of former Saints radio announcer Buddy Diliberto, or as we affectionately refer to him, "Buddy D." In fact, here is a picture of Howie asking Buddy D for some divine intervention with our tickets to the Eagles playoff game in 2007, a game which we won. 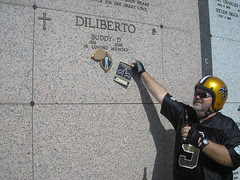 Buddy D. famously promised to wear a dress and parade on Bourbon Street if the Saints ever made it to the Superbowl. We're planning a huge bicycle tour from Buddy D's grave to the Superdome and then to Bourbon Street on Sunday January 31st. It is being organized by Chef Who Dat and will be like his earlier Dash for the 'Stache, but only more dresses this time. More details will follow after the Saints beat the Vikings this Sunday.
But today I learned that Howie already has his dress (it's black and gold, and size 3XXX), and that he plans to bring it to the Dome this Sunday and wear it when victory seems assured. What concerns me is that this is not the first time Howie has experimented with transgender clothing. Back in 2006 Howie got his first taste, and it wasn't pretty:

Moreover, it's supposed to rain this Sunday, so if Howie is wearing a tight dress that shrinks and becomes transparent in water, well it won't be pretty. It will probably look like a giant Thanksgiving turkey marinating in cellophane wrap. God help us all.
Update: Adrastos writes about the dress mania at First Draft.
Posted by Michael Homan at 10:15 AM

Howie & Mrs Luvzus also experimented with Aretha hats (the pillboxes with the HUGE bows on 'em) last Mardi Gras. Why any of this is surprising is a mystery to me. 8-)

I've posted about this at First Draft. Still shuddering at the thought.

Hey Michael! If you're on facebook you should become a fan of "Wearing A Dress When the Saints Make it to the Super Bowl". They've posted a link to your blog. Your buddy will be in good company when he dons that dress.
Pam Rieth

Hi Pam, I signed up to be a fan when I first saw this several days ago. So yes, I'm a fan and member