I bought a very nice gold Saints jersey back in 2006. I thought long and hard about which jersey to purchase, and I went with Reggie Bush, #25. Here is a picture of me wearing this jersey back in October of 2006, the first time my son Gilgamesh went to the Superdome. 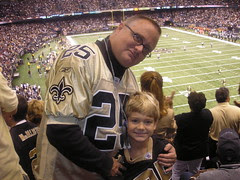 I remember listening on the radio when the Saints drafted Bush. I remember seeing him score his first touchdown on a punt return. That was Kalypso's first Saints' game. But times have changed. Reggie Bush carried the ball just 3 times total in the last two meaning games against Dallas and Tampa. His yards returning punts are meager. Reggie Bush has to be the most overpaid player on the team. Many fans, including the guy who sits next to me in section 327, hate Bush. Every game this guy explains to his wife how Bush is a cancer on the team. I, on the other hand, continue to have faith. While I doubt Bush will be with the Saints two years from now, unless he settles for far less money, I still believe he could have a breakout game. Perhaps he could score three touchdowns, one on a punt return and one on a reverse. So I'll probably wear my #25 jersey. But I also have a very nice Drew Brees jersey. It's got a gold #9 on a black jersey. That's the uniform the Saints will be wearing Saturday afternoon. And thank God they won't be wearing their black pants, as everyone knows they are unlucky, and they will be wearing gold pants instead.
Posted by Michael Homan at 5:52 PM