The Answer is C

A. Should I be more worried about this hurricane: 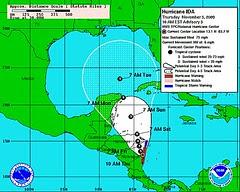 B. Should I be more worried about this gun violence last night near Xavier: 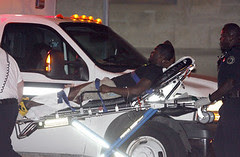 C. I should be worried about both.
Posted by Michael Homan at 9:50 AM


but i gotta say b

Yeah, I'm way more worried about B too.

I saw a 48 Hours special on tv tonight (recorded earlier) about Donnareal (sp?) Shavers and Helen Hill. It stopped recording before the end. I understand David Bonds was acquitted for Shavers murder, and Bonds was arrested for a subsequent attempted murder in 2008. Has that gone to trial yet, and if so, what was the outcome?

Thanks for any info.

While I know the bond was set at $1 million for Shavers in the 2nd degree attempted murder of Guy McEwen last year, I don't believe the trial has taken place as of yet. I believe he is still being held, but am surprised the trial hasn't occurred yet.

B and the reason those students were walking in that part of town so late at night.