Therese and I had a great time at Krewe du Vieux last night. We marched with Seeds of Decline, and we had a monopoly related theme. I dressed as Mr Monopoly, Therese dressed as a buxom girl named "Major Assets." 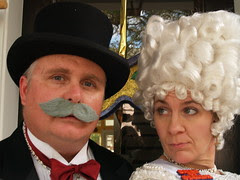 And here is our float, it's got Fannie Mae going down... on a happy Mr Monopoly: 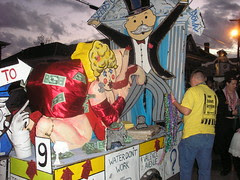 And here is Therese's "Major Asset"... It's Mardi Gras enhanced with Hubig's Pies, and that's her on the right, with Liprap's on the left. Can't put a pricetag on that. 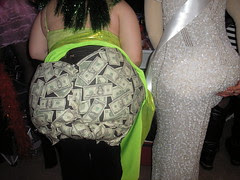 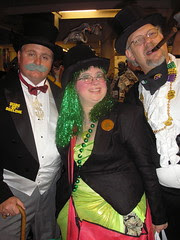 I thought these two had the best costumes, they made their suits out of monopoly money. 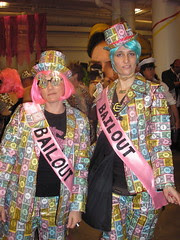 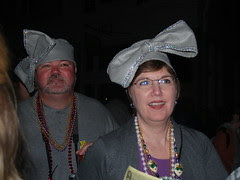 Is the stache still attached?

I took off quite a bit of skin when I took off the stache. Seems the spirit glue was actually liquid nail. And I recently met Mr Hebert, and still think about "Archie, I've got this." I'll explain that quote later.

I LOVED the Aretha hat I saw on the Reverend! He oughta wear those bows more often.