A bit of humor courtesy of The Onion.
Later Note: This photo of one Chicago "fan" isn't very funny, in fact, it makes me sick. 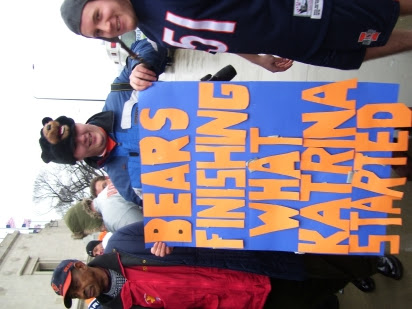 Posted by Michael Homan at 1:26 PM

Chicago checking in. It's too bad that we all have to contend jerks - they're not the city. Hopefully, the Saints fans got to meet some of the real people. Good luck your fight with the insurance and government folks. My family has been to the Mississippi coast a couple of times to volunteer. It was our choice to stay in a FEMA trailer and we went home in a week. Can't imagine what its like to live in one for 18 months or more.

Thanks Anonymous from Chicago above. You are right and I can't let a few people speak for every Bear fan. My mistake. Thanks for volunteering.

I agree that it's questionable, but I have to wonder. Why is it okay for New Orleans fans to say "Katrina couldn't keep us down" but bad for Chicago fans to do the inverse? Please talk among yourselves.

Because New Orleanians suffer every single day because of the failed levees. It's now five years since 9-11, and how do you think it would go over if the Giants were in Chicago and Bears fans bragged that they were going to finish what the terrorists started? That would be very stupid and very cruel.

That's the most rediculous, circuitous thinking I've heard in a while. That's like the stupid argument that Afro-Americans use to explain why it's okay for them to call each other "nigger" but that it's offensive for whites to do so.

Dear Anonymous, please tell me how people who live in New Orleans in 2007 do anything at all without Katrina somehow being involved? For me and my family, it's been a dominating force of every hour of every day for the past 17 months, and I'm writing this in a FEMA trailer for God's sake. So you're saying that the past season should have taken place without referencing Katrina? Come on?!? And the "n" word is offensive no matter who uses it, but I do think it is more offensive when white people use it. It has to do with history.