Today, after teaching my first two courses of the new semester, I bicycled down to City Hall to join thousands of other New Orleanians in a rally to show city officials that we're demanding changes. Too many people have been dying due to violence. Helen Hill, Dick Shavers, and thousands more. We're averaging one murder per day in New Orleans, which is unacceptible. Thankfully, I arrived just in time to hear Bart Everson give a speech. He did a great job. 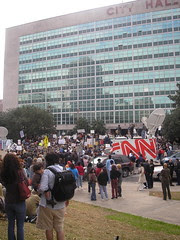 Posted by Michael Homan at 1:18 PM