Is Catholicism A One Issue Religion? 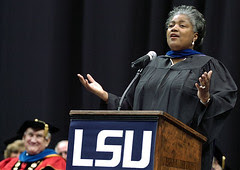 When I first heard that Donna Brazile was going to be the featured speaker at Xavier University of Louisiana's commencement, I was thrilled. I'm a big fan of hers. But trouble is brewing. Several Catholic news organizations, including catholic.org, are critical of the choice. Notice the headline: "Pro-Abortion Political Activist to Speak at Xavier University."

The article goes on to state that Xavier University of Louisiana is Jesuit, which its not, and then it quotes Patrick Reilly, the President of the Cardinal Newman Society (the group trying to get Obama banned from Notre Dame): “Given New Orleans Archbishop Alfred Hughes’ strong condemnation of Notre Dame’s honor of pro-abortion President Barack Obama, it is surprising and saddening that Xavier University would honor a prominent figure opposed to Catholic moral teachings."

While I have never met Donna Brazile, I will go out on a limb and claim that she doesn't advocate abortion. I've never met anyone who did. Instead, Brazile supports a woman's right to choose. And not one of our graduates and none of our faculty are in total compliance with Catholic moral teachings, so why focus obsessively on this one issue? I for one thought the Pope would have been better suited to talk about the problems of poverty on his recent trip to Africa instead of trying to abolish condoms.

So outspoken Catholic moral dogma idealogues, where were your protests back in 2001 when George W. Bush was Notre Dame's commencement speaker? Or do things like advocating war and capital punishment no longer go against the realm of Catholic moral teachings?
Posted by Michael Homan at 10:41 AM

You're clouding the issue with facts Mike -- at least up in these here parts, Randall Terry and his ilk don't bother with such things.

I should know beter than to argue religion with an academic theologian, but here goes.
While supression of speech on ideological grounds is never an easy pill to swallow, it appears that you are overeager to conflate speakers identified with active pro-choice advocacy on the one hand and speakers with less identifiable and more passive support for the right of capital punishment on the other hand as equivalent bases on which to premise an argument for such supression. They are not, at least from the point of view of Catholic dogma. As I understand it, there is at least some doctrinal wiggle room on capital punishment of felons convicted of heinous crimes, while there is no comparable wiggle with respect to denying an innocent unborn of the right to life. It is the wiggle/no wiggle distinction that can allow the church to both argue for and against free speech.
I don't see the church obsessing over the "one issue" as you suggest, as much as I see them drawing a line in the sand on what they see as a fundamental human right and looking the other way on other issues arguably less fundamental or less problematic from a doctrinal point of view.

Thanks for the interesting reply MAD. I wouldn't characterize Bush's breaches of Catholic morals as passive. But one difference might be that Brazile is Catholic and Bush, like Obama, isn't. I remain frustrated by the focus on this one issue. This is the same loud and limited voice that argues against stem cell research. Fundamentally I see all of this as being based on the passage in Genesis where God states "be fruitful and multiply." There are people everywhere, so great job humans, this is the one command in the Bible that we've done well. I will always advocate birth control as part of family planning, and I refuse to lump the use of condoms, the morning after pill, and late term abortions all into the same entity. And I don't see these media seeking actions as representing the Catholic Church as much as I seem them representing a very loud voice within the Church. Gosh, how I miss the days of Vatican II. And because I have many other different opinions than Randall Terry, as in I would like to see women priests in my lifetime, and I never believed in purgatory, well that doesn't make me any less Catholic in my opinion. Terry and followers would of course disagree, but my understanding of Catholicism is that the religion doesn't suffer from such limitations. Much of this might be media driven, and much of Terry's support comes from Protestant circles, but until I hear a similar amount of outrage from these Catholic voices with other issues such as war, poverty, gun violence, drugs, corruption, racism, sexism, and capital punishment, I will view their actions with skepticism. They're not representing my views.

A certain catholicity among the laity is not necessarily bad, and it is certainly not the functional equivalent to apostacy. While I do appreciate and accept the rejection of doctrinal relativism and the passionate defense of fundamental core beliefs, it can be a struggle sometimes to discover the rationality in the selective application of Catholic dogma.

I agree, I think, but on the other hand, do we want a Catholic religion of like-minded Stepford wives who agree on everything? I find a certain amount of dissent to be healthy, and it can help a religion to adapt to an ever changing world.

Mike, I think you've hit on the crux of the problem -- fundamentalist belief systems (regardless of faith tradition) do not leave room for the concept of 'adaptation.' Too evolutionary I guess.

And the current Pope has said as much - even if the Catholic church diminishes to a fraction of its current size, he feels it more important to adhere to rules that arose during the early church Councils (4th thru 6th C) rather than change. Hard for fruitful conversation (or debate) to flourish in the face of such dogma.

But I could be bitter - as we got another dose of Terry today on campus...

If you don't obey the Church, you are no longer Catholic - you are Heretic. The Church does not demand you Believe, only that you Obey. If you cannot Believe, it makes it hard to Obey. If you can't obey, you are more or less working against the authority of the Church. If you are teaching, then you are creating a generation of people who are unable to accept the authority of the Church. If you oppose the Church, please don't pretend you are Catholic.

I don't pretend to be Catholic, because I am Catholic. The Church often disagrees with itself, so I don't buy in to your binary "with us or against us" framing of complex issues. Have a nice day.