Congo vs. Congo for a Red Dot on ClustrMaps

When I'm feeling particularly narcissistic and want to celebrate the great michaelhoman, I like to click on ClustrMaps to see the global distribution of readers of my blog. Turns out I've never been that popular in Africa. I don't understand why, maybe Africans don't share my interest in biblical studies and rebuilding New Orleans after Katrina. Anyway, this post is meant to change that. 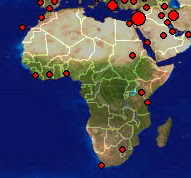 My goal is to get red dots on two countries: The Democratic Republic of the Congo, as well as The Republic of Congo.

Here's hoping the following sentence gets googled by someone in The Democratic Republic of Congo:

And this one I'm sure will be attract googlers from The Republic of Congo:

A Pygmy and a Bantu walk into a bar in Brazzaville. The bartender asks, "You two vote for Denis Sassou Nguesso?" The Bantu replied, "Aller au diable!" Then he killed the Pygmy and ate him for the magical powers.

The first country to show up on ClustrMaps wins a dinner for two with none other than michaelhoman, formerly known as Michael Homan, formerly Abu, formerly Mike, formerly Chopper, formerly The Chopper, oh hell I can't keep up with that either. I will soon be the most popular New Orleans blog in sub-Saharan Africa.

Later: It's now March 3rd, and while I have no doubt that many lucky citizens of the Democratic Republic of Congo and its neighbors from the Republic of Congo have been reading this, they don't show up on ClustrMaps because the damn thing hasn't been updated since February 15th for my blog. Come on ClustrMaps! We need to know!
Posted by Michael Homan at 11:47 AM

He might be onto something with the Bonobo theory... I've always suspected their powers went far beyond just exceptional sexual prowess.

"Particularly narcissistic?" Must check that every day.

Ok-you are not "formerly Abu". You are currently Abu. And you left out "Scooter".