Today most of the volunteers got in the vans and headed for the airport. I'm in my room typing up the final report for the square that I supervise, O-19. We put plastic tarps and sandbags to preserve many of the features early this morning. It was an unusual season in many respects. First and foremost, we were old. The average age in my square was 48, and that was with Kalypso at age 11 and another girl at age 20. One conversation involved the old timers discussing the use of Sears and Robuck catalog as toilet paper. They were hard workers though. This was the season after the great inscription discovery, so it was bound to be sort of a letdown. We also had many more visitors this season. Plus our camera broke, so that was disappointing. I'm ready for it to be over, and to get back to New Orleans. I have a mountain of work facing me, relating to bills and legal forms. We leave this Thursday, which incidentally will be Kalypso's 12th birthday. I try to sell her on the idea by saying that her 12th birthday won't be 24 hours, but more like 32 hours due to traveling with the sun. Plus who wouldn't have a fun birthday with Israeli security at the airport? 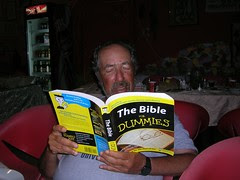 Professor Barkai learning things he didn't know about the Tanak.
Posted by Michael Homan at 1:29 AM