I've been reflecting quite a bit the past two days about my experiences in Washington D.C. last Wednesday. I'm a big fan of the ritual and ceremony that accompanies politics, so for me, I was like a kid in a candy store. I even took this Senate Coaster after asking Mary Landrieu if it would be OK. 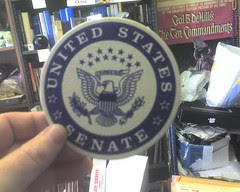 But I didn't drink the kool-aid like Rockey "FEMA Trailer" Vaccarella did, I'm proud to say. Instead, I spoke from my heart and gave them the straight story about living in New Orleans after being screwed by Allstate. Everyone I met in D.C. seemed very smart. They're the kind of people who return emails seconds later, no matter what time or day you contact them. I was especially impressed with the people who work as the support staff for politicians, people like Kevin Avery and Hayne Rainey who work for Mary Landrieu, and Noushin Jahanian who works for the American Association for Justice. During the session, Senator Trent Lott explained that God chose to destroy his house so that he could better serve the people of Mississippi. I found that idea to be very interesting. I'll bet that David Vitter would represent me better if he and his family lived in a FEMA trailer. Trent Lott has a history of working for the insurance industry, and now after Katrina destroyed his home and Statefarm denied his claim, he's their worst nightmare. Several people told me that he is the primary reason that legislation regarding insurance reform will likely pass this congress. It reminds me of stories about religious leaders like Buddha and Moses leaving the palace and seeing suffering going on, and then doing something to bring about change.

On a positive note, Mary Landrieu and others are working hard so that we could not only keep our Road Home funds, but get our SBA loan reinstated. That would really help us rebuild.
Posted by Michael Homan at 12:08 PM