"After all, this is the guy who tried to kill my dad." --George W. Bush 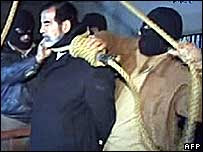 I'm not very proud to be an American this morning. The whole trial was a farce, and life in prison will always be more ethical than execution, no matter the crimes. How surreal that today is Eid al-Adha, the Muslim Holy Day commemorating a willingness to sacrifice a human being. Some analyst on CNN just spoke about how Saddam's execution fits with the New Year's theme of "Out with the old, in with the new." And to think that some in the world actually accuse Americans of being culturally ignorant...
Later note: They just showed footage of Saddam's body. Imagine the outcry in this country if they showed the corpse of our former president following an execution by an occupying force.
Posted by Michael Homan at 4:40 AM

I agree with much of what Anonymous said, but I would have only used only one exclamation mark after "liberal pussy." But I think that five was the perfect number of exclamation marks after the p.s. portion.

What was Saddam convicted of?
Wasn't he convicted of the "crime" of killing innocent people during his attempt to kill those who had attacked him in Dujail?

Wait a minute... If a leader can be convicted and killed for killing innocent people while exacting revenge on someone who threatened him why isn't W. currently on trial.

what a waste of liberty.

as a bush hater i have allways maintained that after 9/11 we should have been in afghanistan looking for bin laden.

i actually had respect for my president when that happened ..

if that fuck would have stayed that course i probably would have voted for his sorry ass in the second election.

Your not a pussy, I like pussy. your a Al Gore loving Pillow Biter. I say kill em All thats what Marines are trained to do

Yes I am fond of Al Gore. Thanks for your input anonymous. I don't think Marines are trained to "kill em All" as you say. In fact, those Marines who are currently engaged in this "kill em All" method are being court marshalled.