Red Dots for the UNOP

I just got back from the Unified New Orleans Plan Meeting. I'm glad I went because now I better understand the Herculean task that we're up against. This UNOP was formed basically to get federal funds into the city. The Louisiana Recovery Authority on the state level won't give New Orleans the federal money until we have a single city-wide recovery and rebuilding plan. That won't be easy. Today we were divided up into our districts. I believe there are 13 districts. The ultimate goal of the UNOP is to come up with one city-wide plan, as well as a plan for each of the 13 districts. But today's meeting was poorly planned. I believe they predicted about 150 people to attend, but there were more likely 1,000. The meeting started with the majority of people still in line. One of the bottlenecks was that people were asked to put a red dot on a large map representing where they lived. Then once inside, there were chairs for about 1/10th of the people. Most went home right away. I think my district, planning district 4, had the most people in attendance, but it also faces some of the biggest problems. We are a very diverse group, with neighborhoods like the Treme, Seventh Ward, Fauberg St John, and my neighborhood Mid-City. Before we could discuss serious business, we also had to put another red dot on another map showing where we lived. Here is our map: 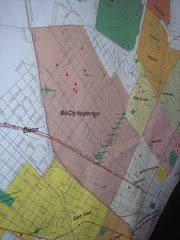 Notice the dots show that at least three people are living in City Park. Our district's facilitator for the UNOP, Carlos, even had a red dot stuck to his glasses, as you can that see here:

Here is another picture of Carlos, he's "facilitating" with a lady named Jean(?) behind him. Jean spoke to us like we had the IQ of a five-year-old. In the end we were basically told that we wanted one overall district planner. That's not what I wanted. Then we're actually supposed to vote on the planner in 48 hours after they make a 10 minute presentation Tuesday. This is one of the most important decisions in the history of New Orleans, and I feel like we're being manipulated. Very few people who live in New Orleans will actually have a voice in who we choose to be our planners. I've got to do quite a bit of research on these planners before Tuesday.

Jean kept telling me to sit down, I never got to red dot anything which may have been the most fun of all.
My other favorite part was when they annouced we had 5 minutes to reach consensus. It was like Musical Chairs

Please do not make us do this again

Michael
here is some reading to snuggle up with
http://www.acton.org/publicat/m_and_m/2003_spring/bohl1.html

the Unified Plan is the BNOB plan..that is why it was formed
they were thrown out the front door and they are coming in the back

Good work, sir. I thought I saw you yesterday but I kept getting cornered so I couldn't come up and introduce myself. I knew you by the hat.

I saw you there too Michael. You seemed awfully preoccupied, so I didn't disturb you. Nice post here, and I have to say, generally. The more thoughtful posts I sometimes can't comment on because I want to be more thoughtful in the reply, and then just don't say anything. Keep up the good work.

Are you open for an interview about your insurance issues? I think Lisa's going to do it, and I may try to get the perspective of an insurance company.

By the way ... how in the hell did you get such a tight shot of that red dot on Carlo's glasses. It's funny. He's the father of an acquaintence who was also there hosting discussions.

I tend to hate facilitated meetings, not the facilitation, but the facilitators. They are hung up on process and not content. I call this the tyranny of process. See "Can't seem to face up to the facts... or citizens/public meetings as "arm candy"

Best wishes for your difficult task.