This week I get to talk with my Intro to Biblical Studies students about some of my favorite passages in the New Testament, such as the Beatitudes. We’re trying to discern Jesus’ primary message and explore such terms as the “Kingdom of God.” We discuss how the Gospel authors believed that it was being implemented in Jesus' lifetime, and how the implementation would bring out the opposite, as in if you are hungry now, in the Kingdom of God, you will be sated. And based on this I extrapolate the following: I'm currently a fat white guy so in the Kingdom of God I might be a skinny brown girl. My students eagerly eat up all of this rich material, UNTIL we get to the Jesus stuff about the preferential option for the poor. Suddenly, they all seem to believe that Jesus was OK with them becoming rich, and not just a little rich, but billionaire rich. That when Jesus says "Blessed are you poor" or "Woe to you that are rich" in Luke 6, he really means morally poor and the secluded rich. My students claim that you can make as much money as you want, just so long as you "give back a lil’ somethin’ somethin’ to society." I bring up Bill Gates, who does give back quite a bit these days, but I ask them if he might have made some morally questionable decisions along the way in building his company, as in selfishly squashing rivals. My students agree that Bill Gates doesn't match well with the terms that Jesus mentions concerning the Kingdom of God. But then my students always bring Oprah into the discussion. As in she is rich, powerful, and they say she makes the world a better place by giving audience members cars. They all seem to think that she somehow personifies the Kingdom of God. I need to do some research about Oprah and then next semester I’ll be ready. So if you have any dirt on Oprah let me know. Thus far I’ve found two things, both of which are pretty bogus. First, there is this website that claims Oprah is the tool of Satan. Second, there is this magazine cover: 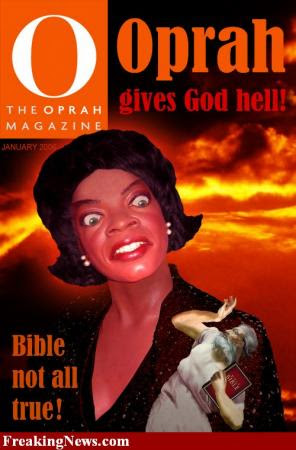 I'm guessing it's slightly doctored. Of course, all of this inquiry could lead to my death, as Oprah is pretty powerful. I imagine it will play out much like the film Angel Heart.
Later note: it took me all morning to load this blog entry, as blogger.com is painfully sluggish today. Is it technology, or could it be Oprah in her first of many diabolical moves to crush me?
Posted by Michael Homan at 8:58 AM