I received a very creative card from three of the people who worked with me in Area AA at Marj Rabba: Madeline, Phoebe, and Tova. It's full of inside jokes so I'll do my best to translate. The card is made out of a brown paper finds bag, hence the stamp with locus and basket numbers. So why is there a fat hat-wearing turkey with a beer on the cover with the words "Happy Thanksgiving"? 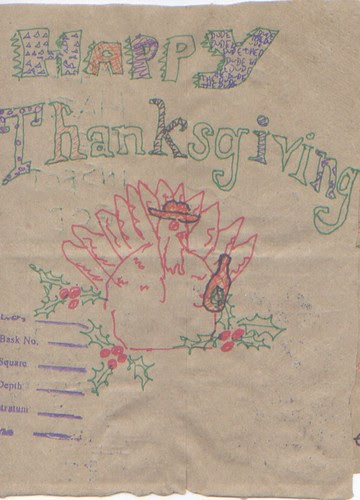 The turkey is meant to be me. At some point early on one of the volunteers said she liked to cook, and her favorite dish to make was green bean casserole. I think that's cream of mushroom soup, canned green beans, some worcester sauce, and then fried onions. I then went on and on about how much Thanksgiving sucked. I think it's also in reference to me wanting to find more in the area, and not being too thankful for the finds that we had. By the way, notice the "y" is filled in with "The Dude." I reminded some of them of the Dude in the Big Lebowski.
Then it's the inside of the card that is the most interesting. 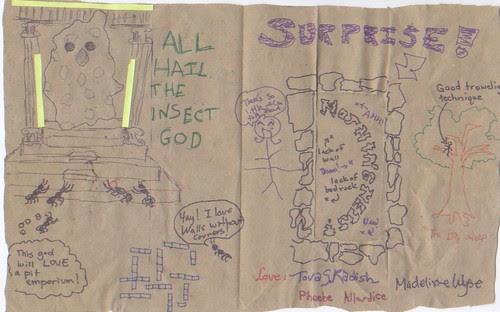 On the left is the infamous insect deity. It was a small clump of mud that looks very much like the picture. We theorized that the insects worshipped it, because with their simple insect minds, they didn't know any better, --it was a god to them. Notice the ant who lost a head in sacrifice. We had many pits of all types in Area AA, hence the "pit emporium" reference. Walls without corners, we had many. Then there is stick figure me complaining that due to age differences (me late 40's, them early 20's), that we had so little that we could talk about. The best part is that there isn't a pop-up, but a pop-down feature. A student named Chas dug a one meter by 3 meter trench looking for bedrock. Instead, we just kept going down to more and more dirt. We started calling it her grave. Finally in the right, there is Gilgamesh displaying good troweling technique while in a nearby tree house. The "Big Sleep" is in reference to Gilgamesh falling asleep one day at fruit break. Funny card, thanks Madeline, Phoebe and Tova, and everyone else in Area AA and elsewhere at Marj Rabba for a memorable excavation.

Posted by Michael Homan at 8:36 AM

I found a lot of information here to create this actually best for all newbie here. Thank you for this information.
run 2 game | super mechs | wingsio | run 2 | wingsio play | supermechs