This is the summer of the mighty Marj Rabba.

I am heading there in early July with Gilgamesh and two of my brightest Xavier students: Melissa Nguyen and Alexis Parker. Leading the excavation are my two friends Dr. Yorke Rowan (Oriental Institute) and Dr. Morag Kersal (DePaul University).

Marj Rabba is a Chalcolithic site in the hills of Galilee located near Karmiel, halfway between the Mediterranean and the Sea of Galilee.

As most of my professional field work has focused on the Bronze and Iron Ages, I've been reading quite a bit about the Chalcolithic period to get prepared. It's a fascinating time, dating to around 4500-3500 BCE, and it's arguably the beginning of the modern industrial world given the amount of craft specialization that develops. It's a transitional time period marking the end of prehistory, and with writing developing in the subsequent Early Bronze Age, the Chalcolithic period is literally the dawn of history. The name Chalcolithic was coined by William Albright, with chalco referring to copper and lithic meaning stone. So it's the Copper/Stone age. I've worked quite a bit with copper production sites in the Feinan region of southern Jordan. I don't plan on seeing any copper though this summer. Marj Rabba is sort of like Nebraska. As Drs. Rowan and Morag wrote in their field report, "the lack of exotic materials or evocative iconography, suggest a relatively self-sufficient village of agro-pastoralists with a mixed farming economy and only limited exchange beyond the immediate hills of Galilee."


Elsewhere, the Chalcolithic period in the Southern Levant is famous for exotic materials and evocative iconography. Some of my favorite ancient figures are big nosed faces carved into basalt. They're common in the Golan region. Here's one: 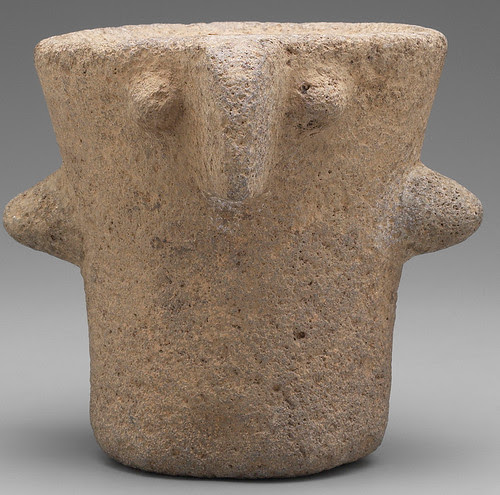 This reminds me of a few of my wife Therese's uncles, as they have giant noses. Another famous image is this clay seated woman, naked of course, with a butter churn on her head. It's from a religious pilgrimage site at Gilat. 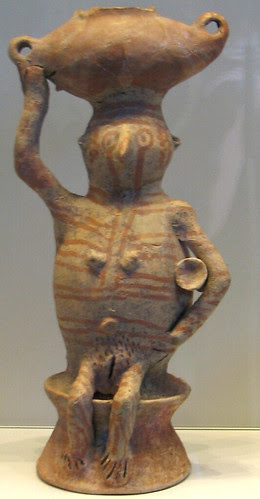 Notice the red stripes. I'm thinking this would make a great Mardi Gras costume. These artistic designs both highlight the nose but don't incorporate the mouth. My theory is that before writing, people didn't have much to say. I'm curious if they even bothered to give each other names. They probably just called everyone "Uggghhh."

The major debate concerning the Chalcolithic period is the level of social complexity. People argue about a shrine at En Gedi near the Dead Sea. Was it ministered by a priest or a shaman? Those who claim that the social complexity was deep and that major cultures such as the one found at Teleilat Ghassul were widespread argue it was a priest. Those who don't see the social complexity as deep and the Ghassulian culture so widespread instead claim it was a shaman. I really don't think I care too much about that. But I am looking forward to working with this project at Marj Rabba.
Posted by Michael Homan at 1:26 PM

I appreciate your idea here. Definitely it has a good content. essay tigers review
Thank you for imparting more of your own thoughts. Good job!