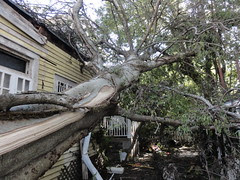 With the rogue restoration of the internet I'm now becoming aware of the devastation that hit places like Plaquemines, Braithwaite, and LaPlace. It's hard to rebuild and I wish these people good luck and fortitude as they try. One nice thing about the 100 hours without power was that we spent some extra time with our neighbors Bart, Xy and Persephone. One night we hooked our generator up to the TV and DVD player and watched The Wizard of Oz. It was fun to watch Persephone (age 4 1/2)'s facial expressions. Without power it was hard to sleep due to the heat. Our bulldog Enkidu had a very difficult time breathing. One early morning I was listening to fishing specialist Don Dubuc on WWL radio. Caller after caller from the swampy coast said they lost everything, and this was followed by the phrase "That's the price we pay to live in paradise." What? I'm guessing these callers haven't travelled much. Psychologically this has been a difficult week with the 7th anniversary of Katrina. Bart commented that it seems to smell like Katrina with all of the dead oak leaves. Also with garbage pick up delayed and electricity-less freezers, the trash cans smell like rotting flesh. But you know, that's the price we pay live in "paradise."
Today I met for the first time with my Prophets and Prophecy students. It's like we lost a week here at Xavier. I had my first class Monday, August 27th, and my second class Tuesday, September 4th. Thankfully none of my students thus far had their homes flood. Some still don't have electricity though.
Posted by Michael Homan at 12:00 PM

Thanks for the update. Glad to hear everyone is okay, but yeah, that 10k of damage has definitely got to suck. I'm hurricaned out; I don't know how you guys do it. Ahhh, paradise. ;-)