I found Oot the Sugar Glider lying dead in his food tray this morning. Kalypso got Oot as a pet in August of 2004. She wrote about that in her blog. She named him "Oot" because it rhymed with "cute." When I left our New Orleans house due to the 2005 flood, Bart and I returned two weeks later in September with my primary objective of rescuing Oot. Bart captures the recapturing of Oot in his Episode 93 of his Rox show. I wrote about it here. Kalypso was very happy to see him when I brought Oot to Omaha where we lived for several months after the flood. At one point Oot seemed dead in Omaha, but it turned out he was hibernating or having some sort of reaction to the cold weather. Oot, like me, preferred to live in New Orleans. There were times when Gil, Kalypso, and Therese advocating selling Oot because nobody played with him. But I could never agree to that. I have a profound and perhaps inexplicable attachment to pets that experienced Hurricane Katrina with me, such as Oot, as well as my dogs Mosey and Kochise. So rest in peace Oot. You perhaps bit people a bit too often, and peed in their hair on occasion, but all of that is to be expected. You were a good sugar glider. I will miss you. 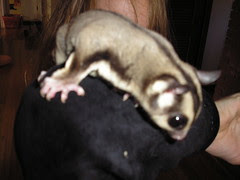 Mr. Homan....
followed your comments for last years
at Bart's b.rox.com...
I earned big-mouth "moderation" there,
so, westerners are not so couth, debonair
as y'all.
I hope, Mr. H., that you might
appreciate a bit of Bible-related-slash-
chicken-little commentary.
Ready?
3600 year roughly cycle. Time of Moses,
before that Sumerian lore. Z. Sitchen...
All that stuff, and Von Daniken before that.
I stumbled into Immanuel Velikovsky's
work-"Worlds in Collision".
He was blacklisted for too much Truth.
"He holds Seven Stars in His right hand"...
Mr. Michael, are clued into
Nibiru/Planet X/Nemesis/Wormwood?
This approaching system is said
to be comprised of the dense Brown Dwarf,
around which orbit Seven planets, the
Sixth of which is the Big One (Nibiru?).
OK, running out of Space, we are.
both literally on this Blog, and Literally,
in our Solar (turns out to be Binary) System!
More coming, I hope you're interested.

Thanks, I am admittedly a fan of Erich von Daniken but mostly because I found comedy in how ridiculous his theories were. Ridiculous to me anyway. Swiss cheese. Then the Discovery channel hasn't helped, because they too present binary solutions: On the one hand, scholars say reason... But there is some controversial guy on an island who thinks the only answer is aliens....Haven't heard of the rest of your references. I have no idea when Moses lived and I'm an expert. I think, like most, that seven shows up a lot in ancient texts because of the sun, moon, and five visible planets. They tried to mirror the cosmos in their superstitious writings. I do love science fiction though, and much of what you write reminds me of Prometheus. It's hard for me to believe the world will end in the lifetime of myself or my children. I did enjoy the movie Melancholia (sp?) though.

So, a genuinely interested intellect
gets squelched both by Churchy-types,
and by
Bart-y types.
So, Mr. Homan
Let us together, as you read, Invoke
our Lord and Savior, Jesus, and
ask for a blessing of Discernment. Amen.
-----
Here's what I posted, but won't show, at
Bart's blog.
:
If you didn't now,
The Macondo/Deepwater Horizon Blowout started a Severe Cascade,
or emphasized that which was already underway,
the unstable salt-dome reality of your area is just now
being revealed by catastrophe.
Did you Know:
Salt domes are officially allowed to be pumped full of, and
maintained, with liquid butane, under pressure?
Also Propane?...and that these fields, domes, networks of
pipes and pumping stations all lie within close proximity?
Did you know that they used an experimental Nuke
in a Mississippi Salt-dome in 1962?
Did you know that Oil Tanker ships routinely return from
overseas, full of toxic fluids, chemicals, which are then
pumped down into expired salt-domes under your land,
and under the Gulf?
Did you know that signs of Gas Bubbles are being seen
well up the river?
I know y'all are Bizzy.
Maybe Too Bizzy to raise yore Haid up, and see th'
DEE-Zaster about to happen!
Bart!
Please commit your Blog Archives, to the Present, to Durable
Hard Copy, for the possible-but-not-likely-future.
It is clear our electricity will be Gone. WebNet, Gone....
and most folks have been trained to rely on this tech,
for their very survival.
Please Run to the Rockies, Bart.
------
Michael...?
The question stands, are we to place our
minds for struggle-to-survive on this
Prophetically-guaranteed-to-Suffer-World?
Like, as in, for example, maybe,
You would want to Flee from Dee-Zaster?
OR...I say, OR,
Are we to Faithfully Accept our End
on the Physical plane, in humility?
The interplanetary forces cause increased
Stress on all these vulnerable deadly systems
which exist all around You-All in NOLA.
If you look beyond the Peasant-screen level
of news coverage, enenews.com is It.
Thank You for your Patience, and Work
for His Word and Mission.
By His stripes we are Healed.
HalleluYah!
Jon. S.
Please Run to the Rockies.

Hey, Thank You for your response,
my second overlapped your first,
so I sorry for any mis-comm...
-btw-
Andrew Gabriel Roth....
tremendous scholar.
He is Hebrew Roots movement,
and
Has produced the AENT
Aramaic-English New Testament.
I took pages of notes during his last
series The Moses of History, and
The Moses of Legend.
You will appreciate His work.
GLC Tv network is on Dish Network
in our NM area.
There is a Big Cover-up revealed in
careful tracing of Egyptian Records of
the Time.
Amenhotep II is the Pharaoh who
lost his firstborn to the plague, and
chased Moses, and Died or was Lost
in the Sea of Reeds.
This caused huge political uproar,
and the Powers of Egypt quickly realized
they needed a fake Pharaoh, because
he's supposed to be Divine and
Perfect and all that. So...an Impostor
was placed in the Throne, and...
So, I Hope you appreciate some
Brazen, trail-dusted Westerner blabbin'
at ya.
There is The High Chronology and Low,
in this Egyptian Record...
The Hyksos treated Joseph as they did,
but The New Kingdom was in place,
who knew not Joseph, by 1570 BCE,
the year they decided to enslave Israelites.
1 Kings 6:1--Exodus was 123 years later.
that's 1447 BCE.
Egyptians feared "the Chaos at the End
of the Age"...Omens in the SKY (he Screamed)!
The Rise of Sothis (Sirius)...signalled the time.
Moses born 1526 BCE
Moses Dies 1406 BCE
Moses 80 (almost 81) at Exodus.
Sighting of the Rise of Sothis at Memphis,
not at Thebes.
Year of the Exodus, in Fact, Passover, on
March 22, 1447 BCE, a Friday, a Full Moon.
A.G. Roth...
He does emphasize the disagreement
of scholars. Very fascinating stuff.
OK, you are a serious Family Man.
The Time is Upon Us. We Live in a
World of Lies. The Prince of the Powers
of the Air . Steve Winwood-Season of the
Witch. I don't want to Pick Up their Stitch.
The Sinkhole is Primary concern Now...?
Are you Painfully Aware of the Falsehood
Games y'all live UNDER? You're a Lawyer.
I've had Lazy-ass time to Study a little.
Hope this may be of some Value to you.

Mr. Michael,
Sorry you need this link,
unless you already went to enenews.com.
It is a False World. False Prophets.
Some of us don't have a Nice Job,
because we pursue Truth...and are lazy.
tee hee!
:
:
http://enenews.com/paper-cavern-of-butane-1600-feet-from-sinkhole-propane-cavern-also-in-vacinity-combined-capacity-over-3-million-barrels-officials-a-lot-of-dynamic-things-happening-nearby
:
:http://enenews.com/official-reports-that-butane-release-from-salt-cavern-could-be-like-h-bomb-explosion-are-a-little-bit-over-the-top-company-plan-may-do-damage-out-two-thirds-of-a-mile
----
They Lie every minute to you, Mr. Michael.
Righteous Exalteth a Nation.
Thank You.
Jesus Rules

dear holman family. i am writting this to pay our respects to oot.

seems like oot lived a charmed life with yall.

i hope yall decided on a burial and / or a shrine in the back yard.

our love to you and your family in this time of sadness.