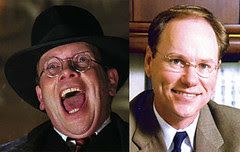 Note: Today James Gill has a very entertaining piece carefully comparing the reaction by New Orleanians to both Mathews and Spoons Butler. His point was that people in New Orleans hold grudges. Not surprisingly, I can't find Gill's piece on nola.com.
Posted by Michael Homan at 12:28 PM

As an archaeologist, you might want to make an impression of any scars seared into Rick Mathews' hand. It could prove useful on your next dig in the Middle East.