Today I began class by telling the students my experiences from six years ago. They were amazed that I swam to Xavier one day, and also that I naively thought that the world would change after those horrible events. I thought America would shift from policies that only benefitted the wealthy share holders to help some of the most disenfranchised. This afternoon I walked with my dogs to the Katrina memorial near our house. It's where they buried the remains of all of the unidentified victims who passed away during the flood. My dogs were a big part of my flood experience, and I was glad they were here. It's always depressing to remember what happened six years ago. My dogs in a way are lucky, as they don't know it's the six year anniversary of anything, and they certainly don't understand the concept of a Katrina memorial. Kochise even peed on one of the signs there. But luckily today is Monday. So I'd rather commemorate a Monday tradition instead of anything as horrible as a mass levee failures and suffering and death. Here is a Monday tradition in our house and throughout New Orleans: the classic red beans and rice with cornbread. 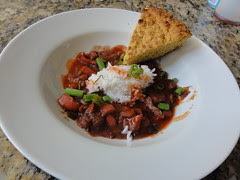 Posted by Michael Homan at 3:49 PM

today hit me like a kick in the nuts.

i think the swamp smoke makes it more heavy.

hope yall are well. your pals rick and trish.

We had beans and rice too. But yours looks much more gourmet.

I discovered your blog when I was looking for blogs about Hurricane Katrina about a year after it occurred. I come back to your blog sometimes, and it is always a pleasure to read.