The internets was down the last time I had a day off from excavating in Jordan, so I'll do a weeks 3-4 post about Barqa later when it all comes into better focus as the sands of the Jordanian desert fall away, but for now, Gilgamesh and I are in freaky deaky Egypt! We're hanging out with my student Shavonda and her mom Eula. We got to know them very well during the dig, so they're sort of like family now. Today we went to the pyramids. It was great to hear Gilgamesh get so excited when he first saw the giant ones in Giza. But first we went to Saqqara to see the step pyramid. The highlight of the day for me was getting to take a few pictures inside the Tomb of Ti, as the pictures there show how the ancient Egyptians made beer. Here is me, Ti, and much beer: 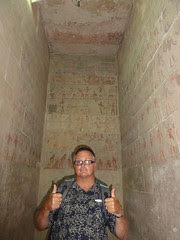 Then we went to Saqqara to see Imhotep's Step Pyramid, and here is a pic of Gilgamesh and yours truly: 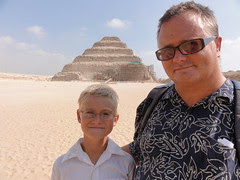 Finally it was off to Giza for the big three pancakes (note "pyramid" is Greek for pancake). Tomorrow we're off to the Egyptian Museum, but for now, here are a few panorama shots I took with my fancy new camera:
The Red Pyramid and the Bent Pyramid:

Ubiquitous camel and the Giza pyramids:

Sphinx and the Giza pyramids:

Posted by Michael Homan at 8:56 AM

Have been enjoying the blogs, brings back the memories of 12 years ago when we were all there.
Love, Mary Michele

Did Gil take the picture of you in Ti's happy hour beer tomb? You look satisfied. Therese